Flaunt your skills and design the cover for my next book!


Starting today and running through March 31 April 1, 2013, The Nobodies Cover Contest gives you the chance to design or create the cover image for my next book, The Nobodies--a mystery/thriller set in a post-apocalyptic New York City in the not too distant future.

This is a great opportunity for up-and-coming artists and those looking for additional exposure of their work. And entering is easy. All you need to do is:
In April, I’ll handpick some of the submissions for voting by readers (yes, you can vote, too!). Images, along with further information about their artists if applicable, will be posted on a weekly basis until all eligible submissions have been voted upon, at which point the highest-voted images will again be posted for the semi-finals. The highest voted image will become the cover for The Nobodies upon release!

See the official rules below, or this list of Frequently Asked Questions, for more information.

To help you in your creative process, below you’ll find a brief synopsis for The Nobodies as well as some suggestions imagery to use. It may also help to check out the cover of my previous novel, Sanity’s Flaw: 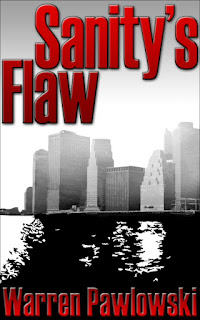 Additional information, such as character or setting descriptions, story excerpts, or other specific details are available upon request. If you have an idea or have a question, don’t hesitate to reach out.

Enough from me. Here’s a brief synopsis to get the creative juices flowing:

Five years ago, the major financial centers of our country were smothered in poisonous gas. Minutes later, millions were dead. Thousands more perished in the ensuing riots. Under the threat of war and reeling from the massacre, our economic system collapsed overnight as entire industries floundered. If not for the strength and perseverance of one man—newly-elected President Jonathan Stokes—the United States would be no more.

Now, in the decaying ruins of New York City, where the dregs of society live behind a wall of fear and chain-link, Walden Procyk has just been left for dead. Waking to a blood-covered woman at his side and a group of self-proclaimed terrorists expecting his help, he must decide where his loyalties lie before it’s too late.

But his choices are slim. And the more he learns of the group and their mission, the further he wants to be from them. The questions is: does he let them try to accomplish their goal, or does he take them down himself?

And some suggested imagery to use (remember, unless otherwise noted, everything should have a post-apocalyptic tint):


Feeling up to the challenge? If so, and you’re ready to submit, just send an email to warrenpawlowski@gmail.com and check back here, or on Twitter or Facebook, for updates!

NO PURCHASE NECESSARY TO ENTER OR WIN.

Visit warrenpawlowski.blogspot.com and click on the “The Nobodies Cover Contest” link for information on how to enter or send an email to warrenpawlowski@gmail.com. Entrant’s email to warrenpawlowski@gmail.com should contain a maximum of up to six (6) cover images, entrant’s full legal name, preferred nickname if desired, additional background information if desired, and a direct link to entrant’s Web page if desired. Images must be created by entrant, unpublished and may not have won any prize or award. Photos must be .jpg, .psd or an equivalent image format. Abbreviated or tracked links to any Web page will be ignored and not posted.

All entries are final upon submission. Entry materials may not contain brand names or trademarks. Sponsor reserves the right, in its sole discretion, to reject and/or disqualify any entries, subjects, or related materials that Sponsor deems to be nude, obscene, defamatory, profane, offensive, lewd, pornographic, false, misleading, deceptive, or otherwise inconsistent with its editorial standards, audience expectations, or reputational interests or that Sponsor believes may violate any applicable law or regulation or the rights of any third party. Sponsor reserves the right, in its sole discretion, to verify any element of any entry or related materials, request additional information and to disqualify any entrant whose participation may subject the contest, Sponsor, or Sponsor's clients or customers to controversy, negative publicity, scorn, or ridicule.

There will be three (3) rounds of judging:

VOTE COUNTS DISPLAYED ONLINE MAY NOT BE ACCURATE. RESULTS ARE UNOFFICIAL UNTIL ALL ONLINE VOTES HAVE BEEN TALLIED AND VERIFIED BY SPONSOR.

Second Round – at the end of the First Round, Sponsor will select up to ten (10) submissions from among all previously displayed submissions based on the total number of votes received in the First Round (50%) and Sponsor preference (50%). Sponsor reserves the right to select fewer than ten (10) submissions if, in its sole discretion, it does not receive a sufficient number of eligible and qualified entries. These up to ten (10) submissions will be posted to warrenpawlowski.blogspot.com alongside additional information about the artist(s)for voting by the Web page’s reading audience. Voting will close on or about one week after Second Round has begun.

If a tie occurs at the end of the First Round, Sponsor will choose the entry from among the tied entries Sponsor deems most appropriate for the Second Round.

The up to ten (10) Cover Contest Finalists will be notified by email and/or telephone before the start of the Second Round. Sponsor, in its sole discretion, may disqualify a Finalist for any reason, without limitation.

VOTE COUNTS DISPLAYED ONLINE MAY NOT BE ACCURATE. RESULTS ARE UNOFFICIAL UNTIL ALL ONLINE VOTES HAVE BEEN TALLIED AND VERIFIED BY SPONSOR.

Final Round – at the end of the Second Round, Sponsor will select one (1) Cover Contest Grand Prize winner based on the total number of votes (50%) and Sponsor preference (50%). In event of a tie, the images of the tied Finalists will be re-judged according to the criteria of the Second Round for an additional week.

ELIGIBILITY: Legal residents of the 50 United States, and the District of Columbia, 18 years of age or older who are the parent or legal guardian of the child depicted in the entry, are eligible to enter.

CONDITIONS/WARRANTIES: Entrants agree to be bound by Official Rules and agree that if any winner fails to provide proof of identity, refuses to provide documentation, is found to have violated the Official Rules or otherwise does not meet eligibility criteria, prize will be forfeited and awarded to an alternate winner. Entrants understand that Sponsor is not liable for injuries, losses or damages of any kind arising from participation in this promotion and acceptance, possession and use of prize. Sponsor is not responsible for any typographical or other error in the printing of the offer, administration of the Promotion or in the announcement of the prizes. Decisions of Sponsor are final and binding in all respects.

Sponsor assumes no responsibility for entries it is unable to process due to network, hardware or other technical failures; or any other reason, or incomplete, damaged, misdirected or lost online entries. Sponsor reserves the right, in its sole discretion, to disqualify any person tampering with the entry process, the operation of the website or otherwise in violation of these Official Rules. Sponsor further reserves the right, in its sole discretion, to cancel, terminate or modify this promotion if not capable of completion as planned, including infection by computer virus, technical corruption, non-authorized human intervention, or any other causes beyond the control of the Sponsor which corrupt or affect the administration, security, fairness, or integrity of the Promotion. In the event of cancellation, Sponsor reserves the right to select winners from among all eligible entries received prior to date of cancellation. The use of automated entry systems or any other conduct that impedes the integrity of the Promotion is prohibited. In the event of a dispute regarding online entry, entry will be deemed made by the holder of an established email account associated with the entry.

RELEASES: By participating in this Promotion and accepting any prize that they may win, entrants agree to release Sponsor, its parent, subsidiary, affiliated and successor companies, advertising and promotion agencies and prize suppliers, and each of their respective officers, directors, agents, representatives and employees, as well as each of their respective successors, representatives and assigns (collectively, the "Released Parties") from any and all actions, claims, injury, loss or damage arising in any manner, directly or indirectly, from participation in this Promotion and/or acceptance or use of the prize.

Entrants authorize the Released Parties to use their name, voice, likeness, biographical data, city and state of residence and entry materials in all media now known or hereafter discovered, for any purpose, including without limitation, in connection with, and to promote, market or advertise the Promotion, in whole or in part, without review, approval, credit or attribution, notification or payment from or to entrant or any person or entity, worldwide, in perpetuity, or on a winner's list, if applicable, unless prohibited by law. Sponsor is not obligated to use any of the above-mentioned information or materials, but may do so and may edit such information or materials, at Sponsor's sole discretion, without further obligation or compensation.

PRIVACY: The information provided by entrants in association with this Promotion will be used only for activities involved within the Promotion and the awarding of prizes. IF YOU DO NOT WISH TO SHARE YOUR INFORMATION, PLEASE DO NOT ENTER THIS PROMOTION.

DISPUTE RESOLUTION: Except where prohibited, by participating, Promotion entrants agree that: All issues and questions concerning the construction, validity, interpretation and enforceability of these Official Rules, or the rights and obligations of participant(s) and Sponsor and its agents shall be governed by and construed exclusively in accordance with the laws of the State of Connecticut without giving effect to any principles of conflicts of law of any jurisdiction. Entrant agrees that any action at law or in equity arising out of or relating to this Promotion, or awarding of the prizes, shall be filed only in the state or federal courts located in the State of Connecticut and entrant hereby consents and submits to the personal jurisdiction of such courts for the purposes of litigating any such action. Except where prohibited, by participating in this Promotion, entrant agrees that: (a) any and all disputes, claims, and causes of action arising out of or connected with this Promotion, or awarding of the prizes, shall be resolved individually, without resort to any form of class action; and (b) any and all claims, judgments and awards shall be limited to actual out-of-pocket costs incurred, including costs associated with participating in this Promotion but in no event attorneys' fees; and (c) under no circumstances will any participant be permitted to obtain awards for and hereby waives all rights to claim punitive, incidental and consequential damages and any other damages, other than for actual out-of-pocket expenses, and any and all rights to have damages multiplied or otherwise increased. Some jurisdictions do not allow the limitations or exclusion of liability for incidental or consequential damages, so the above may not apply to you.

GENERAL: If Contest winner notification is returned as undeliverable, the entry with the next highest score may become an alternate winner. Subject to all U.S. federal, state and local laws and regulations. Void where prohibited. Contest Finalists and Grand Prize winner names will be posted on warrenpawlowski.blogspot.com on or about June 1, 2013.
Labels: contest cover self-publishing The Nobodies Updates