In grammar school, I begrudgingly enrolled in Shop, the only alternative to the more female-friendly Home Economics. There, we learned the very basics of woodworking (something I had already gathered from my father) and built a series of simplistic—yet impressive given our age—designs. Such as a six-piece wood puzzle with a trick slot I later colored with markers to appear more extravagant. Or a folding table and matching chair I used for a few years.

Inevitably, each served as little more than dust collectors at my parents’ home. I assume they’ll turn up one day, but at the moment, I couldn’t even make a guess where they’re located.

Given this, I never would have believed that, years later, I would not only pick up woodworking again, but do so with a fervent passion. I suppose it’s simply a hobby homeowners eventually need to consider, just like we’re tasked with learned the basics of plumbing, landscaping, painting and electrical, but, to me at least, it seems less maintenance and more art. 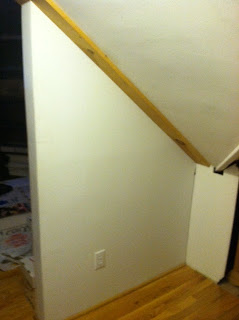 By this, I mean woodworking requires not only function but aesthetic value. For instance, take a look at the picture above. One of my rooms has two of these bizarre nooks as a result of poor framework during an expansion and at first I could not fathom what to do to maximize the narrow space’s potential. 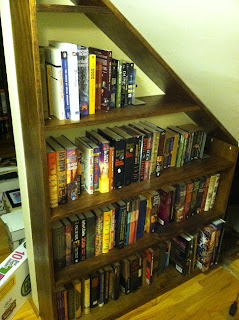 A bookshelf, however, proved perfect, even if it is but stage one for a more expansive “library” within the room—I plan to construct a matching shelf parallel to this one and two more along the perpendicular walls.

Though the shelf required some creativity in the layout and some finesse with my buzz saw (I hadn’t yet laid claim to my father’s table saw, which was, like my childhood creations, collecting dust on a shelf), what really drove my interests toward woodworking was my comic collection. At the time, it was mostly housed within ugly, corroding cardboard boxes threatening to overwhelm the room in which I stored them. With some nearly twenty years old, they were certainly showing their age (and the presence of some creatures better left unmentioned), and were mostly just eyesores. I likely would have been fine with them, but my wife, whose goal is to beautify the home up to the standards of HGTV, implored me to do something—anything—about them. So, after scouring the Internet for a viable solution and finding none I particularly fancies, I proposed a rudimentary set of drawers. 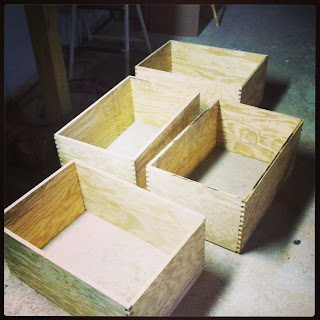 It took months and months—and was delayed slightly further when, after rescuing our lovable new dog, Dixie, I hastily crafted a set of gates to fully enclose our yard—and many 4x8 sheets of half-inch plywood, to complete. 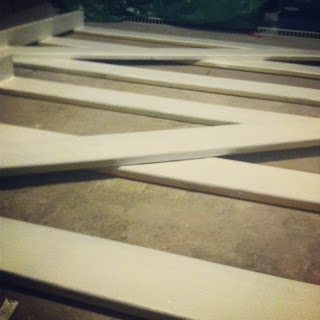 What resulted was, although far, far from perfect, a fully functional cabinet. 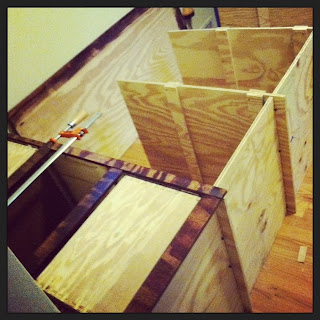 I plan to build a matching, mirrored version soon, though, based on all that I learned while constructing its twin, it will likely be heavily modified from my original design. 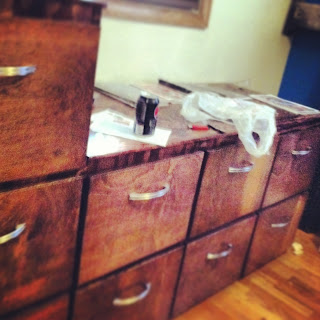 Most recently, my wife gained a sudden urge for a cabinet in our sun room to store items for the dog, as well as umbrellas and similar items. We shopped around, and it seemed the only version available for what she had in mind was about a quarter of the preferred size and just short of $100 at Home Goods. Shaking my head in dismay, I told her I would build something instead. So I did.

She showed me a few designs online of what she wanted in a cabinet, and I made a quick sketch. She approved the primitive layout and I got to work. I pre-built the piece prior to applying any stain/polyurethane in order to better shape it, adjust for integrity and add additional support (something I learned the hard way from the comic drawers). 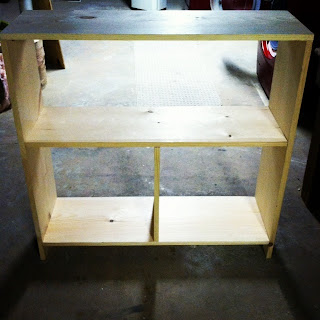 Though the wood I chose for the cabinet faces was not as high quality as it should have been (notice the chips in the picture, which will bother me until I eventually replace the wood). 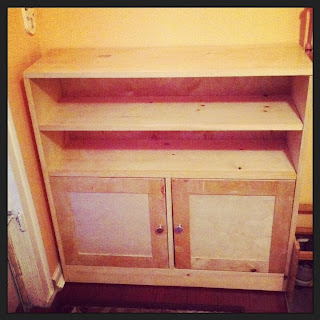 My next project? Well, reinforcing storage shelves I suppose. Then, perhaps, building a stand for our washer and dryer. But my sights are on something a little more… shocking.
Labels: Art Diversions Hobby Hole