The Nobodies: Crafting the Logo

Since starting this iteration of oPaP two years ago, I’ve attempted to offer a blend of promotional, personal and behind-the-scenes information for a more nuanced look at the ongoing efforts of being an author (and, occasionally, artist). So, while I unveiled The Nobodies’ logo last week, I believe it will be more beneficial to give some insight into how I reached the final product.

Unlike the logo for Sanity’s Flaw, which, though somewhat similar in nature,, was meant to exemplify the more conventional mystery/thriller titles, I wanted something with more pop, something more akin to Elmore Leonard or Stieg Larsson—authors whose books I originally picked up on a whim due simply to the eclectic nature of their covers (particularly their typeface).

Still, unsure exactly what effect or color I desired, I searched for some basic online tutorials and, after poring through several pages titled “20 Incredible Photoshop Text Effects” or there about, opted to try the “Shiny Neon Text Effect” out for size. Here’s the example provided in the directions:

Other than the rainbow coloring, which I didn’t feel represented the overall tone of The Nobodies, I rather enjoyed the effect and its potential undertones given the nature of the novel.

That’s a bit vague. But, you’ll understand when you read it.

Unsure of the color, I chose to pick a different one, a solid. But, before I could even tackle that, I had to select a font.

Just as I had with Sanity’s Flaw, with a general knowledge of the desired appearance, I typed my title into a Word doc and scrolled through a multitude of fonts, leaving each I felt could be a potential winner on-screen before continuing. 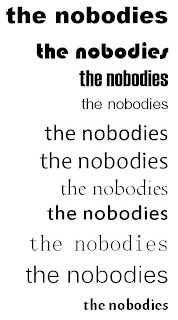 From these select few, I narrowed the options rather quickly to but three fonts before settling—with some glee—on the simple, yet elegant, Arial Black.

My font chosen, I commenced with the aforementioned directions, though attempted to do so WITHOUT changing the color from the generic black (the overlay was the color I chose, however). This resulted in this rather uninspiring logo:

As you can tell, I wasn’t thrilled with this result. Frustrated, I futzed with the layout, tweaked the layer effects and, in a feat of creative enterprising I mistakenly did not document as I cooled off with a condensation-laden Kraken and Pepsi One, created this version:

I loved this. Unfortunately, shortly after its crafting (and an idiotic layer merge), I was forced to temporarily delay work on the cover and logo. It was over a month before I returned to the project, at which point (naturally), I had completely forgotten the steps I had taken to build it. There I was, sitting at my desk, staring at this mysteriously designed logo. I zoomed up to 800 percent, studying its edges, its glow, its colors. Every time I thought I had discovered a portion of its seemingly intricate nature, I struggled to recreate it, wondering all the while how I had evolved it so from the “Neon Effect” version.

It took an hour and a half, with a twenty minute break somewhere in the middle to sequester my thoughts with a few rounds of Black Ops II and an Imperial Pale Ale, before I finally cracked the code. Though far from how it was originally conceived—I recall making great use of the image adjustments—I managed this slightly different, though arguably incredibly similar, logo through the use of bevels, Gaussian blurs and a spattering of three layers (you can still see the influence from the “Shiny Neon,” though its markedly different).

With a self-congratulatory pat on the back, I considered this the final effect and applied the same to my name.

Satisfied with both pieces, I duplicated all the layers (learning from my earlier mistake), merged the copies as needed, and copied the image to the chosen cover image. Once applied, though, the cover seemed… empty. Soulless. Devoid of any real pizazz.

I considered my options and thought back to the sketch cover, which I had decided wouldn’t be used (much to my chagrin). It embodied the teamwork behind The Nobodies so effortlessly, while also offering a hint at the relationships within, that it was almost depressing not to use the image. So, returning to that document, I shrunk its size and recolored it to match the logo, applying a light bevel (but decidedly excluding the other layers, which served only to diminish the layout) before bringing it to my logo file.

I toyed with a variety of placements, both above and below, but it was the cover image that eventually dictated precisely where the new addition would be located. 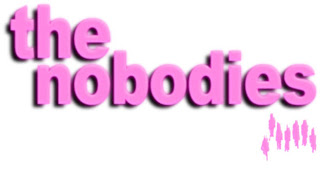 Still unconvinced, I added the underline for further enhancement, verifying the change with my wife, who, as she does, smiled and agreed it was a perfect finish. The logo seemingly complete, I brought the new version to the final cover image. While I was satisfied with it, there still appeared to be too much unused area, primarily in the immediate vicinity surrounding my name. To temper this, I reformatted the font, increasing the size and shifting the layout.

It was done. Or so I believed.

To promote the image, as I recapped last post, I printed and snapped various pictures of the logo. While I liked what I saw, I noticed I didn’t love it as much as I had on-screen, realizing the top layer’s Gaussian blur took away from its effectiveness. Returning one final time to the file, I removed the effect from all the various pieces and, feeling spunky, added a shadow to the underline. 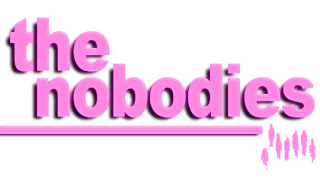 I always enjoy offering these insights—much more so, in fact, than simply discussing marketing matters or providing updates on where I am within the writing process. Entries like this are easy ways to navigate my tumultuous and ever-evolving thought process and, years from now, will hopefully allow me an opportunity to reflect on my humble origins.

On a side note, I have an incredibly uncomfortable bout of Poison Oak spread over my arms and legs as I type this, so I’ve been forced to write with my forearms in the air. Aside from relieving the itchy burn associated with resting the rashes on a surface, this does nothing to help the writing process and I cannot, in any case, recommend trying it. Just don’t do it. Rest those arms. I’m sure you’ll need them.

The Nobodies will be available soon for both Kindle and Nook.
Labels: Art cover design self-publishing technique The Nobodies Updates