I mistakenly read this latest issue of Aquaman after reading Justice League, not because this ties into “Trinity War,” but because, as I opened the book, I became immediately disappointed by Aquaman’s depiction. My sorrow waned, however, and by issue’s end, not only was I positively delighted by the cliffhanger, at least part of the new depiction was clearly present.

The cliffhanger was based on a rather clichéd motif, and though Johns does nothing to shatter the mold, the sudden development does come naturally and builds upon a moment briefly explored earlier in the arc. The buildup also allowed a blockbuster climax alongside the jaw-dropping finale, and although the issue is relatively light on dialogue, it never felt like filler (again, it’s hard not to compare this to the inferior Justice League issue simultaneously released).

Another consequence of reading Justice League first: I continually expected unnecessary splash pages. While Aquaman does offer a few, they’re brilliantly utilized to evoke set pieces on a massive scale rather than more subtle moments, several of which are presented throughout the issue in smaller panels befitting their intimacy. Reis knocks it out of the park on these splashes, though consequently it seemed other portions of the book fell by the wayside, some pencils appearing unfinished or, at best, unpolished. This may be a consequence of the inking or coloring, but the issue’s visual consistency was notably lacking. 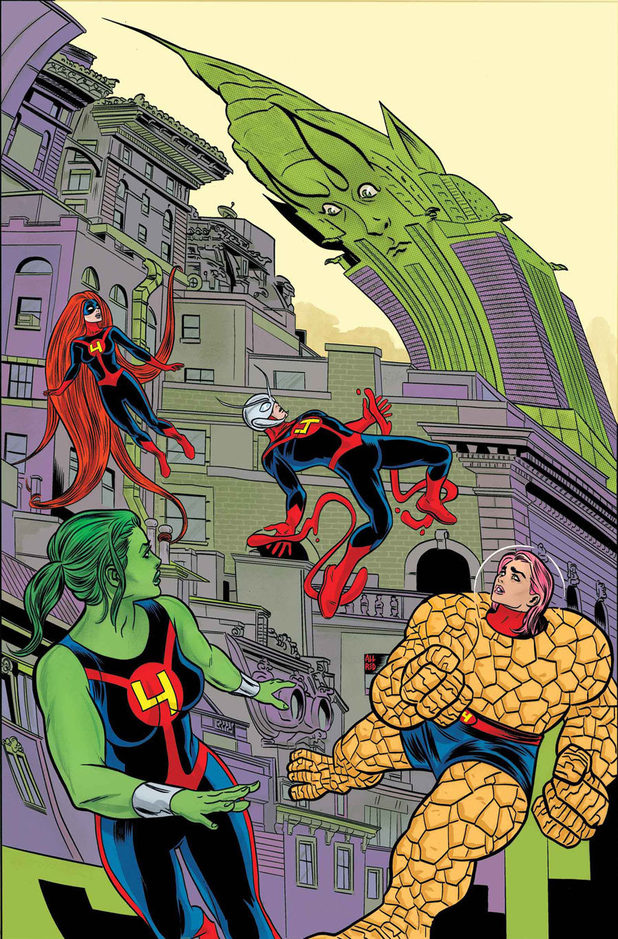 I broke into laughter—not just LOL, mind you, but full-blown giggling fits—three full times during this issue and, immediately upon finishing it, grew so morose and melancholy I hardly wanted to continue wading through my reading pile.

Why such varied reactions? Well, the issue is packed with the charm and wit we’ve come to expect from Fraction, who has been offering some of the best, and most dependable, work of his career in this and Hawkeye. Not all of the humor is resigned to the dialogue either: the definition of conquering on Caesar’s chalkboard, for example, left me hardly able to contain myself. Admittedly, though, it was Adolf Impossible’s (yes, that’s truly his name) reaction to Scott’s touch that garnered the greatest laugh.

The unfortunate truth, though, and why I tearfully reflect on the run now, is that this is Matt Fraction’s final issue on the series. He’s moved his efforts to the upcoming Inhumanity—a series I’m doubtful I’ll purchase, let alone devour as readily as FF, despite the presumed presence of Medusa, who enjoyed some much-needed character development this issue that invoked a softer side to her personality we very rarely witness.

Fortunately, Fraction is only half the equation. That said, it’s hard to say more praise concerning Allred’s art, so I’ll be brief. The pencils, particularly during the time-travel and Adolf tantrum scenes, were perfect and beyond even the high standards previously demonstrated. Allred has been a huge factor in FF’s success, and though we’re losing Fraction, I’ll be sure to tune in every month.

Just as I feared after reading Justice League Dark no. 23, the closing chapter of the “Trinity War” crossover doesn’t provide an end to the conflict. Like a well-tuned opening act, the crossover only managed to fill the void before “Forever Evil” with enough spectacle and pizazz to get me excited for what comes next.

I think the main problem with this issue, and the crossover in general, lies within the large, dynamic cast of the three titles, as most of the characters were simply unnecessarily included. Others, like Shazam or Cyborg, see potentially shattering developments that lack any payoff. Atom(ica), who has quickly become my favorite character of the entire roster—undoubtedly for her dry wit, which comes as a breath of fresh air every time—may surprisingly have had the largest role in the book, if not the central storyline, which is bizarre given her recent insertion into the titles.

In the end, I fail to see what “Trinity War” accomplished that necessitated six issues and several tie-ins. As I mentioned last week, the same buildup to Forever Evil likely could have been condensed into one breathtaking prequel issue (think a no. 0) if the filler—I’ll include Superman’s “illness,” as that truly felt lackluster in the end, as well as the Trinity of Sin, which had virtually no role in the plot other than delivering Pandora’s Box—were removed.

But, while this issue of Justice League proved to only be delicious filling, it was, by far, some of the prettiest I’ve seen. The whole book oozes beauty, especially two of the three splash pages—one of which harkens back to the conflict’s first tease during Free Comic Book Day—which are filled to the brim with enraged heroes chomping at the bit to do some damage. The third splash… well, it was useless and could have easily been pared down to a single panel (such as moments exemplified in the latest issue of Aquaman).

Criticisms aside, “Trinity War” definitely fulfilled its task: it has me excited in a way I never thought I’d be for Forever Evil. I’m truly looking forward to next week.

The Manhattan Projects no. 13 by Jonathan Hickman and Nick Pitarra | $3.50

I have difficulty deciding what I like the most when reading The Manhattan Projects: Hickman’s writing or Pitarra’s art.

This is, easily, my favorite series Hickman has written. While the plot still hints at a massive, mind-boggling scope (like his other series), every issue is filled with potent characterization, intrigue and worthwhile developments that, while compared to earlier works like Secret Warriors, which was so shrouded in unnecessary vagueness it proved only readable in collected form, every issue of The Manhattan Projects is a delight. Even those like this one, which is basically a stepping stone toward the next conflict after last issue’s dramatic turn of events, offer thought-provoking concept evolutions and plenty of cringe-worthy dialogue hinting at the protagonists’ (can we really call them that?) darker sides.

It’s tough to describe the brilliant simplicity of Pitarra’s art. I can only compare it to Mike Allred’s, though I’m quite certain much of that is due to the basic, yet deep, coloring (in this book, provided by Jordie Bellaire while Laura Allred takes care of it in FF). Elegantly straightforward, the cartoonish art allows the book to stand apart from most on the stands (it was also the first reason I picked this series up).

One other aspect of the series I realized I loved this issue? The grotesque, yet unfathomably unique method to which we’re allowed cameos from characters long departed. It makes me wish every character could have its brain devoured.

Poor, poor Albert. He’s somehow proven Ving Rhame’s turn as a hot dog roll in Pulp Fiction could have been so much worse.

Other than that revolting two page spread, which has me hopeful Albert has a chance to wield a samurai sword in the near future, the sixth issue of Sex offered very little outside the movement of chess pieces. We see more concerning Lagravenese’s eyesight, Keenan’s dealings, Warren’s (woot) questioning, the Old Man’s takeover, and Simon’s juggling act, but it felt as though Alice had left Wonderland. Though it was nice to see “the unfortunate consequences of hi-tech super-villainy,” as the solicitations teased, unlike with The Manhattan Projects, the heart of the issue is surprisingly lacking.

Kowalski’s art remains strong, his blend of abstract reality continuing to evoke a sense of remote authenticity despite the fictional world’s high concepts. I still have no idea what the different color highlights in word bubbles represent, but I’ve gotten used to them as the series has progressed. Unfortunately, despite Kowalski’s ability to finely portray events (both brutal and sensual), Sex is quickly plummeting toward the bottom of my read pile. It looks as though I won’t be following its progression much longer. 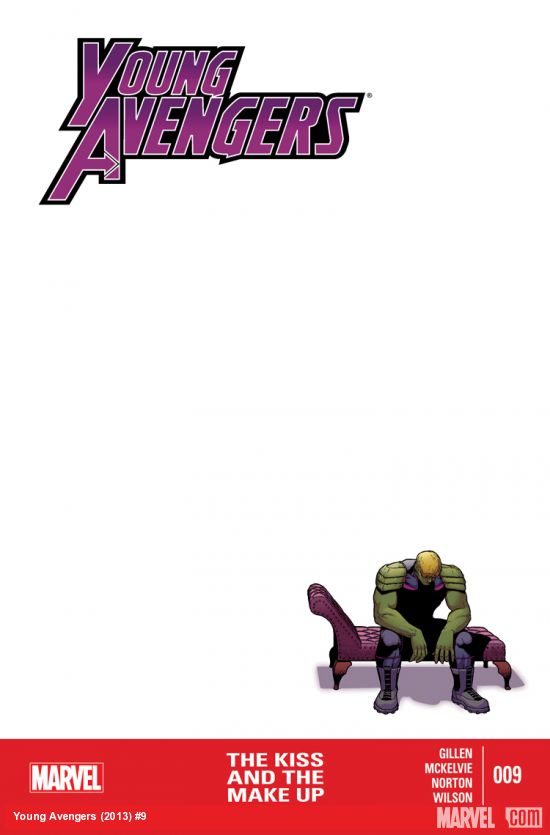 The Young Avengers no. 9 by Kieron Gillen and Jamie Mckelvie | $2.99

This series makes me feel old.

It’s not like how disgusted and out-of-touch I felt watching Miley Cyrus twerk (I had to ask my wife it she was the one who had been on Disney as Miley pulled her best Gene Simmons impression), but it does reinforce the fact I’m now firmly on one side of the generational (or, at the very least, maturity) split. Because, honestly, I just don’t get it.

Perhaps the book’s trying to be cleverer than it needs to be. I read the entirety of Gillen’s phenomenal Journey into Mystery run, for instance, and the nods thrown toward that this issue left me more confused than nostalgic. Obviously, this seems to be Gillen’s intent, as the book’s characters are either just as confused as I am or as omnipotently knowledgeable as Gillen, but its growing more frustrating every issue.

The saving grace for this book is Mckelvie’s art. The whole run has been characterized by unique plays on panels and the use of gutters, while offering wildly original layouts (something of a recent trend, as both Batman and Trillium have done the same to great effect), and this issue is no different. Panel borders melt and transform into tentacles snatching characters from the void, or represent floors begging to be shattered and allow character to escape into the world(s) beyond. It’s a great use of the medium and effects that could only be demonstrated in this form.