Despite another odd naming convention, Black Adam nicely continues the Shazam backups from Justice League, and although the man in red only makes a modest cameo here, it feels like a logical next step, whetting my appetite for an ongoing series I assume is on its way.

While I wish this issue's events occurred closer to a year or so from now to allow the backups' fallout to maintain its emotional resonance, the reasoning for them is well supported and presents a number of potential repercussions across the League titles. Which brings me to the main problem with this issue: it's almost entirely setup.

Sure, things happen—bad guys get punished, antiheroes return—but the main plot seems only designed to cater to the future Shazam series, let alone Forever Evil.I suppose that's fine, but the timing in relation to that mini-series' events still leaves me wondering who it was that appeared in that debut issue. I had previously believed it Shazam himself, as he had donned the black outfit toward the end of "Trinity War." Could it have been Black Adam? Based on this issue's cliffhanger, would he have really listened to the speech without blowing people up? I'll be glad to reach the eventual answers; hopefully, they're actually coming. 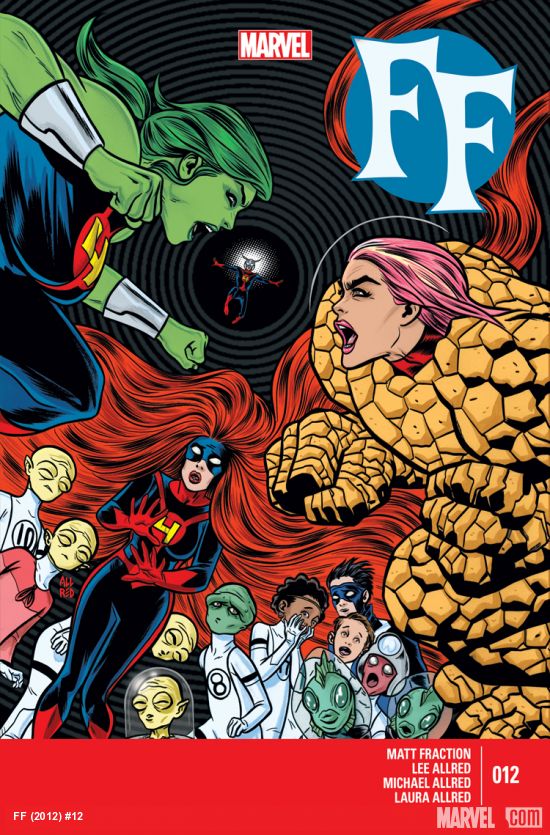 Anyone worried FF would feel different or drop in quality with the loss of Fraction as lead writer (I know I felt some trepidation after the last two issues of Fantastic Four) need not worry: FF continues with the same off-the-wall antics while, almost impossible, upping the meta factor tenfold.

Although it was a tad weird to see Fraction, Allred and editor Tom Brevoort appear within the title a few issues back, it helpfully reminded readers that Marvel Comics is very much present within its own fictional universe. This issue plays that fact up further, with the students offering commentary to newbie Adolf Impossible regarding his father's assumed villainy (his costume uses secondary colors, so he's evil, duh!).

And, a bit less meta but nonetheless a play on real-life takes on Marvel characters, how cute was the shojo anime page? Seriously. I certainly awed.

My one gripe with this issue, and the easy way to note the author(s) had changed: hanging dialogue was used for nearly every scene transition. It's an appropriate effect when used sparingly, but its overabundance here became a little too distracting.

After his brief cameo in Black Manta no. 1, I was quite excited to get my hands on Ocean Master. In that issue, he came off as cool and collected, as though, like his bug-headed counterpart, he were above the common miscreants surrounding him.

Then this issue happened, and Black Manta no longer seems as tough, though he continues to act as though he's beyond those around him, treating humans no better than wildling pets. This led to some imbalance within the plot, as his overall ambivalence toward humans wavered throughout the issue, though the final page seemed to cement his character's thoughts on the matter.

Borges' art was quite reminiscent of Ivan Reis' pencils in Aquaman proper, giving Ocean Master an air of belonging. I believe there was one rather annoying error, though, in that there are two prisoners who refer to Ocean Master as "new fish" at different sections of the book. Were these supposed to be the same man? The titular character's action seemed to imply this, as did the prisoner's earrings, but based on their hairstyle and overall design, I'd have to say no. Seems like an oversight.

If you've ever seen Aliens vs. Predator: Requiem, you'll know what you'll find in this book. No, I'm not referring to balls-to-the-wall-monster-mash-up-action, but rather a whole lot of black visuals that terribly obscure the action. Though I understand the plot points meant to be reflected in the darkness (Ultraman's allergy to the sun, for instance), like in AvP:R, Secret Society simply attempts too hard to come off as hard and edgy at the cost of the enjoyment. It's a shame, too, because what can be seen of Kudranski's art seems incredibly promising.

The plot didn't help matters, as it was filled with nothing but teases for upcoming and future plotlines. There was a lot of "You can't know that yet" and "My terrible secret no one should know" but no true answers. I suppose that goes hand in hand with calling this book Secret Society but truly only focusing on one character. In truth, this issue read more like an alternate universe take on a poorly written Batman comic, though we weren't privy to the rest of the storyline.

The Wake no. 4 by Scott Snyder and Sean Murphy

As a fan of really weird history—especially anachronisms, which drive me absolutely wonkers with wondrous glee—this issue's two page opening made me completely lose me shit. Seriously, as soon as I read them, I wrote, "Holy fuck."

Perhaps the brilliance of the opening, combined with my sheer ecstasy, may have clouded my judgment somewhat going forward, but the remaining pages never caught my interest as strongly. The majority was filled with familiar horror tropes, thogh—such as the key pad delay (why would they even need a keypad there?)—so perhaps it was just the drop from "unique and exciting" to "great but I've seen it before" that made me come out of the issue less than thrilled.

Murphy's art was simultaneously brilliant (the two page, almost mirrored spread of the drilling platform toward the end, which almost works as a diagram of their journey, comes to mind) and confusingly muddied (the first few pages of the underwater action scenes). The latter critique may be more attributed to Matt Hollingsworth's coloring, as the hues awkwardly blend together, though it's hard to tell.

Given we're not even halfway through the series (I believe it was originally announced as being at or near 12 issues), I have no idea where this story is going. But I love it.

This issue opened with a scene all too satisfying to comic readers as, in just two pages, Gillen and Mckelvie bring Mother's powers to an entirely different level I won't spoil, though if you've noticed the way she freely manipulates the gutters in past issues, you'll be pleased to no end here.

Unfortunately, the book went downhill from there with a storyline just as awkwardly confusing as past issues, with our main characters speaking in riddles, their vague descriptions seemingly meant only to prolong the title's ongoing mysteries. I suppose it makes sense for Loki to speak as such, given his position as the trickster god, but the rest? Not so much.

Though it wasn't much less confusing than the other sections, I will say the support group was rather entertaining, delivering most of the issue's dry wit. One thing I noticed during that scene, though, was that, while it was only the second or so to feature more than blank white coloring behind the characters, the backgrounds were noticeably lacking. Has there seriously ever been a New York coffee shop with zero decor? This lack of definition aside,  Mckelvie's characters continue to pop from the pages in deliciously positive ways.