I've been both a bit run down and incredibly busy the last few days, so I apologize for the delay on these. But, as they say, better late than never, yeah?

I was sad to hear of the impending end to Animal Man, but after reading this latest issue, I would have been writhing in anticipation at what could only be an undeniably glorious conclusion. If not for the fact Lemire already hinted that Animal Man would not be going anywhere.

That said, this issue was not what I expected, both in terms of the general conflict as well as the significant plot point. While it definitely seemed like an interlude of sorts to break the ongoing Brother Blood saga into more manageable sections, it was rather important all said and done and could, potentially, add even further depth to the rich Red/Green/Rot story. Will it all mean anything in the end? I don’t know, though while I'm doubtful, I’m certainly hopeful.

The art was iffy at times, lacking clear definition in many panels and appearing more like a spoof of the regular Animal Man than an actual issue. Other times, it was clear Hamner had a firm grasp for the character and his world, offering visuals rivaling any of the best yet to come from the series. I only wish the entire issue was so well-executed.

While I was tolerant of the pulpy storyline within Black Science’s debut issue, it was truly the art that shined for me, delivering page after page of breathtaking vistas. Unfortunately, those are practically absent in this second issue, which focuses more on the characters than the locations. Thankfully, though, the writing takes it up a notch.

If you’ve ever seen the classic Sci-Fi Channel series Sliders (I own the entire series on DVD and now desperately want to re-watch it), you’ll understand Black Science: it’s Sliders crossed with Star Wars. Now that we know more of the characters’ motivations, and they’re more “personalities” than “talking heads,” it will be nice to see where things progress from here, especially if other dimensions offer such surprising sights as those seen these first two issues.

As I mentioned, the art is much weaker this issue, but only in comparison to the great opening. Characters are well-designed and, though it can be a little trying to tell a few apart this early in the game, that should grow easier. One character’s face was a tad too angular and repetitive for me (the same smile appears several times), but otherwise the storytelling is fine. 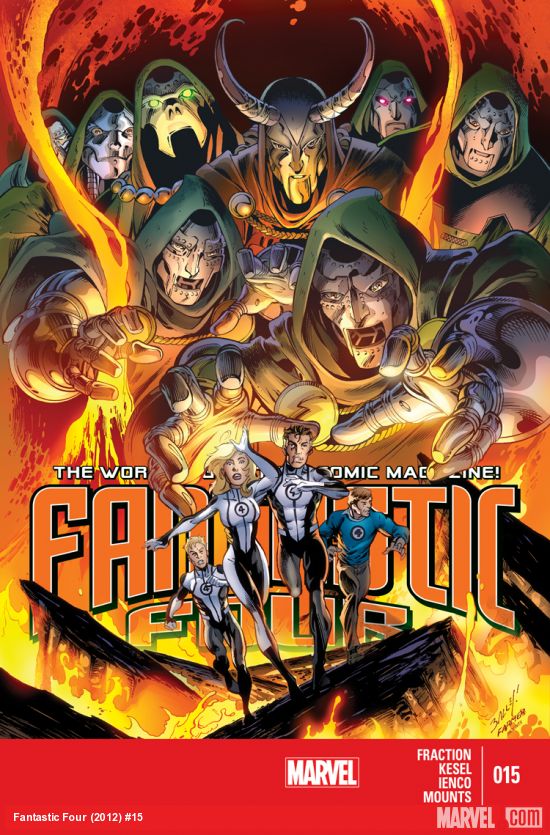 If Marvel hadn’t pulled Fraction off Fantastic Four and FF to do… whatever it is he’s actually doing now that Inhuman has switched writers, this issue probably would have been amazing story-wise. As it is, though, the reveals, which should be mind-blowing and evoke a shocking “Oh!” out of readers, instead feel tediously convenient while the action, taking place entirely within a different dimension, feels utterly pointless.

Ienco’s art doesn’t make the lackluster pacing of the storyline any better, and may actually be the main culprit, as reveals are not relegated to page turns or splashes or anything with any actual effect. Character designs are also weak, their movements stiff—though not to a point it’s distracting. Rather, it’s simply not up to the standard of earlier issues or even the far-better issue of FF released the same day. Frankly, it looks like it was cobbled together last-minute, without any time to fine tune. And, I’m certain that’s precisely the case. 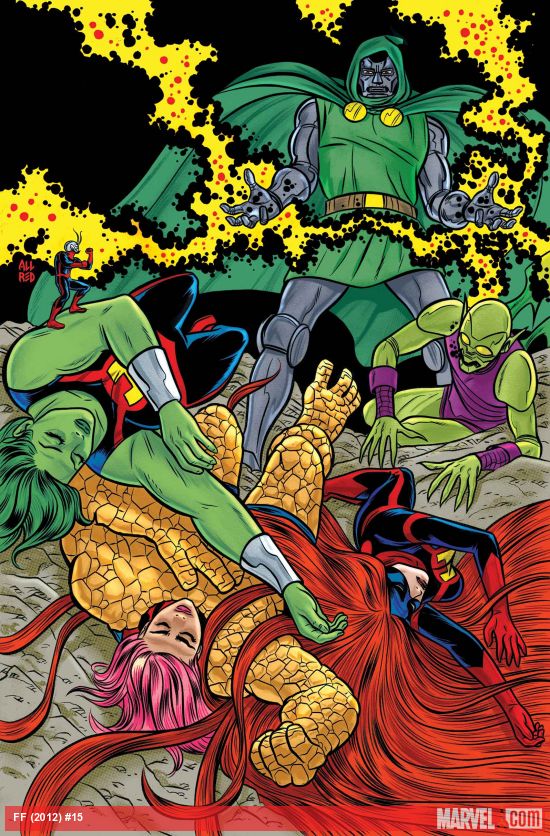 The “final” battle against Doom began with such great promise, as the plan was outlined in grand (and poetic) fashion that made ample use of the title’s surplus of action figures, and then quickly segued into an amusing back and forth between the children. Even the bit on videogame culture made me laugh at its perceptiveness.

However, this issue quickly lost its steam as we became plagued with wooden dialogue, over-explanations and far too many plot threads for its own good. It felt like the end of Return of the King, with scene after scene tying things up that could have, and likely should have, been handled differently. It’s unfortunate, but such is the job of the penultimate issue and I suspect next month’s finale will handedly deliver (unlike the sister title’s conclusion, which I’m simply dreading).

One part that didn’t lose momentum, however, was Allred’s art. His framing choice in particular created an ongoing sense of conflict as well as some well-deserved brevity. I wonder, though, if, lacking these and expanding each page’s story to the full length, the issue would have felt more coherent?

It’s hard to live up to an excellent debut, and while the first proper issue of Harley Quinn doesn’t deliver the exact same level of zany hysteria as the zero issue, it continues to offer laugh-out-loud moments that have been far too lacking in the New 52.

The issue’s opening, which quickly updates readers on the situation if they oddly decided to skip the debut, is a prime example of this. I admit, I previously looked over the opening’s art without any dialogue or text boxes and simply didn’t care for it. However, with their addition, the book takes on a whole other level of funny, and the back-and-forth between Harley and the teary-eyed Dachshund particularly floored me.

The writers don’t just deliver the funny, though, as about halfway through the book the adult side of my brain began to wonder just how they were going to explain away all the required fees and taxes associated with “inheriting” a piece of property. Thankfully, they don’t shy away from this fact, and use it as a significant drive going forward.

DC’s Deadpool this may be, but it is very, very welcome.

While reading Saga’s latest issue, I screamed or whispered wildly different variations of the word “Fuck” three times in rapid succession as the narrative continued to surprise and shock me into dumbfounded submission. Any comic capable of allowing me to explore that word’s many uses should be treated as little else but gold.

One scene in particular stole my attention this issue, and it wasn’t any of the three above. In fact, it was the one in which we’re finally granted an answer to the question posed a few issues ago: what is the opposite of war? The revelation is, frankly, electric and so aptly correct. Needless to say, Staples also delivers the strongest panel of the issue here, playing with eye-catching design that flagrantly walks the line of taboo.

Saga has continually offered more than just a comic with the profoundly entertaining letter column, and this month we finally get the results of the 2013 reader survey. While not as laugh-out-loud uproarious as last year’s results and (correct me if I’m wrong) much shorter in their analysis, it’s a pleasure to see what fellow readers are like. Vaughan also teased something within the column that may show up very soon within the book, so that served as a well-oiled hype machine by itself.

Of course, there was also that Worf/Picard bit. My God, the horror.


It seems like the days of rotating artists on ensemble titles are not going to come to an end any time soon, though in its execution Young Avengers is more akin to the ill-begotten Dial E than it is the marvelous Harley Quinn no. 0.

Not that the story is bad. In fact, I’d say it’s one of the strongest in all the series and provides some elaborative, somewhat surprising answers to a number of questions while opening several others (Seriously, where did Tommy come from?). I thought America’s “origin” story was particularly well done, especially as it tied into the ongoing narrative of the plot (which now explains why we weren’t privy to this information several issues ago).

No, the problem is the artists themselves. While each conveys their section admirably (particularly the aforementioned origin story, which reminds me of some of the best Dr. Strange stories in its delivery), only the continued use of similar coloring ties the book together. I would have preferred McKelvie to handle the book in its entirety, but I get it.

Unlike a great number of comics nowadays, the latest issue of Zero has very, very little dialogue. However, the bit that is there feels incredibly important. There’s no witty banter, no throwaway lines. Everything is calculated, everything is needed. It unravels slowly, bit by bit, and by the end, it feels absolutely epic.

Then, they fight. A silent, bloody fight that last almost the entire issue. Like above, there are no witticisms here, only death, destruction and mayhem as the reader is forced to keep up. The art by Jeske fits this dynamic so perfectly, his rough, sketchy style depicting the chaotic action so fittingly it’s no wonder Kot paired the artist to this storyline. Only once or twice did I have any difficulty understanding the characters’ movements, but it quickly became clear precisely where the story was headed.

Simply stated, this issue was amazing.