Due to the holiday (and the lack of my own computer), these got a little off-track, so I figured I’d combine the weeks into one larger post. Unfortunately, that means pairing some great entries from last week with some not-so-fantastic ones. Eh, what’re you gonna do?

So, there I was thinking Geoff Johns was actually going to be leaving Aquaman alone when all of a sudden there’s mention of a Justice League event without any indication of where the Aquaman solo title is headed come next month. Will Johns’ storyline simply be handled in his other story, with Aquaman only reflecting the massive changes that take place there? I surely hope not.

Anyways, Johns’ climax, stiff dialogue and odd Mera finale moment aside, proved to be a suitable ending for the seemingly clipped run, tying together just about all of the plot beats introduced over the previous 24-ish issues. The poor king, though. I don’t suppose we’ll hear much more from him… though this is comic book world, where even melted ice people can reshape!

Much of this book was poster-ready, and I’m rather shocked I haven’t seen more in my random Midtown Comics perusals, as the store is completely plastered with such art. Of particular beauty was the single splash page of Arthur catching the trident, though I appreciated the looks Aquaman was given on the page that followed, along with the bewildered dialogue. Probably the best moment in the whole book.

What an oddly constructed and confusing book.

I understand this is a Rick Remender joint, and that his titles, much like Jonathan Hickman’s, tend to read in a more disjointed manner than most other mainstream titles, but this book didn’t really gel until its very end. At that point, the two ongoing threads—the visual journey and the journey alluded to within the character’s inner monologue—converged.

If I were buying this book simply for the writing, I’m not sure I would come back for a second helping. There seems to be lots of promise, but quite poor execution. Thankfully, the art baited me hook, line and sinker. It is absolutely gorgeous and manages to tell a far more complete story than the text. In fact, I’m certain the book could have been sold without any of the story but the sporadic dialogue and I would have been even happier.

It reminds me of something straight out of Heavy Metal, though on a longer basis. And that’s certainly not a bad thing.

For the first time, the now Fraction-less FF (though he does make an excellent cameo this issue) managed to best the Fraction-more Hawkeye in terms of sheer quality, with the Allreds delivering of my favorite issues yet of this ill-fated series.

Perhaps I’m simply relieved this series hasn’t fallen as harshly as Fantastic Four, but the dry humor, gorgeous art and pitch-perfect interplay between the characters puts this leaps and bounds ahead of the original book, and, honestly, most other books on the stands.

I wish the Allreds teamed up even more, as I’d follow them most anywhere at this point. Here’s looking at you, Silver Surfer.

The best part about this issue is the cover. It’s simply gorgeous. That isn’t to say what’s inside isn’t; it is. Just not as gorgeous. Sorrentino offers some great visuals, and continues to play with layout with pages like the spread showcasing Ollie’s practice.

However, can we talk about that Indiana Jones page near the end? Were those platforms floating? It reminded me of Jak & Daxter and I don’t think it was meant to. For a moment, I convinced myself one of the large statues in the background was holding one up, but this was sadly not the case. Hopefully, this is clarified next issue.

The writing. The writing, the writing, the writing. Raise your hand if you know Green Arrow’s real name is Oliver, sometimes just Ollie. In case you forgot, we’re reminded of that in every page. Sometimes twice in a speech bubble. Multiple times a panel. Even when only two people are talking. Why is that necessary? If I say a person’s name once in a conversation, it’s a lot, and I can go whole nights without actually doing so unless we’re in a crowd. It’s simply not needed and detracts from what is otherwise a fun plot. 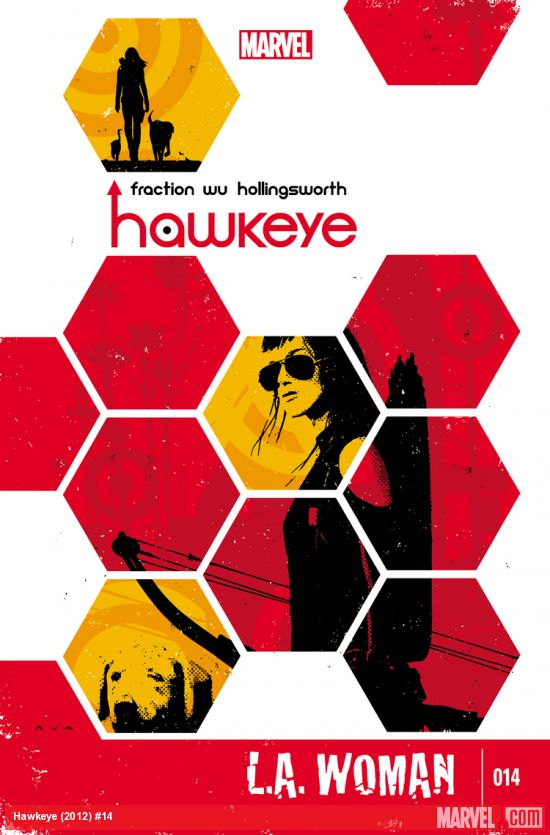 Marvel has a new habit of cancelling books only to relaunch them immediately with a brand new #1 on the cover and about twenty variants waiting to suck up the relentless collectors’ cash. Despite the triple digits on Hawkeye’s cover, I’m wary of the same happening here given the book is not exactly at the top of the bestseller list every month. Still, there’s hope, as Daredevil recently relaunched with the exact same creative team.

Oh, and a bump in the price.

Well, they’ll keep doing it as long as they’re able, and I’m fairly certain I would continue picking up Hawkeye if it were relaunched, since it continues to be my second favorite ongoing. Even this issue, which focuses on Kate and harkens back to Veronica Mars while touching on current events, impressed, though not as much as the recent Clint issues.

It’s not the art—I thoroughly enjoyed the shifting presentation, which matches quite well with Aja’s despite lacking the incredible panel-work of last issue—but rather the storyline, which lacks the same impact of Hawkguy’s continued difficulties.

Though its only sixteen issues in, we’ve already seen a few transitional issues within Saga—that is, ones where very little happens except setup for what comes next. Unfortunately, while some of these have been bloody brilliant, this one has very little going for it.

Not only does the issue generally end where we began (or, at least, where we were a few issues back), but this is the first issue that truly feels like “filler,” which surprised me. Sure, the Circuit was entertaining as a nod toward the superhero soap opera meme (complete with a pitifully small audience), and some of the character exchanges were nice, but there was nothing touching, nothing surprising and nothing outright exemplary on the offering.

Sadly, the weaker plot was also supported by what I would categorize as the weakest art yet from Staples. While I love her layouts and general designs—the picture book page was great—for both characters and sets, the art suffered in medium shots, such as when Alana turns away from Marko during their conversation. The surprising lack of clarity ripped me immediately from the experience and it was difficult to go back.

About halfway through the latest issue of Swamp Thing, I flipped back to the cover to ensure it was still Charles Soule (who has absolutely delivered on the title post-Snyder) in the writer’s chair as, for some reason, the magic seemed to have been lost.

Perhaps it was the chaotic nature of the storyline that gave me a sour taste as, instead of focusing on one conflict or situation, the new Swampy delved into a Who’s Who of DC’s DARK corner, with prominent beats focused on Animal Man and Mister E. None of these felt satisfying, though they could have been if developed properly.

The writing style for this issue in particular harkens back to more classic comics, where conflict was thrown at the reader and protagonists for conflict’s sake rather than to further the plot effectively. Of course, you may have noticed I only reference the first half or so, as the ending simply floored me. It opens up many possibilities within not only this story but across the DCU as a whole.

The art was also classics-oriented, pleasantly servicing the plot with standard layouts and standard designs. There were a few points, though, that channeled some of Swamp Thing’s earlier creative designs, such as when Animal Man attempts to channel his powers, but these were sporadic.

If average reader demographics are correct, I think I understand why Young Avengers doesn't sell as well as some of the more mainstream Avengers titles. Because, while I may be growing older, I'm still relatively young and only a few years outside of college, which is more than I can say for many comic readers. And I simply do NOT understand this book.

Sure, alright, I get the plot in theory. Loki betrayed them all with his errant power, love conquered all, yadda yadda yadda. What I don't understand are the smaller moments. What did Kate's comeback to Noh-Varr mean? Why did Billy suddenly fall down? Is David really in love with Teddy? How did America beat up all of their evil selves? Was that paint? (EDIT: Keiron Gillen's notes on the issue helped a TON. If only they were included in the issue.)

Seriously. There are too many questions in this book and not enough answers. If I'm growing frustrated, I can only imagine how other, older, readers feel. And I doubt there are that many on the younger side picking this up, despite the love for Scott Pilgrim within Young Avenger's pages.

Now that I've said all that about the plot, I do want to call out the superb layouts from Jamie Mckelvie, as I now understand why so little attention was paid to backgrounds. There are a few pages here, specifically once Billie becomes the Demiwhatever, that are simply brilliant and will likely stand the test of time for their innovation.