Children’s Book: Why Writers Should Know Math, Too

I wasn’t originally going to write an entry on this, but the more I thought about it, the more important I thought it was.

Be forewarned: this gets a little complicated.

There’s a specific items I’d like to appear on one of the pages of my children’s book that ties into a future novel. While I’d established the concept and background for the item, until this point I hadn’t given even a thought to its appearance or functionality other than what I didn’t want it to look like.

Well, since I needed to draw the thing, I figured it was about time I did.

I started by writing a few notes at the top of my sketch pad on what the item’s basic functions should be.

After, and though some might say it wasn’t actually required, I tried to figure out the process behind how the item would complete those basic functions. I delved into the Internet for potential theories and, after mulling through various pages like a kid in a ball pit, chose two fundamentally sound hypotheses and slapped them together with the equivalent of Star Trek-versioned duct tape.

Now with a sound (at least in regard to a novel) theory in place, the next step was to figure out what was needed, physically, to fulfill its purpose. I won’t get into what that entailed at the moment, but this gave me the purest components of the design, which I could then play with and adjust as I saw fit.

There was one final point I had to resolve, though: the item’s size.

Again, avoiding any specifics, the item needed to have a minimum effective distance, which I pictured as a sphere during my thought process. To simplify, however, I conceived of the problem as a circle instead. In the figure below, you can note the two required minimums marked as an x and a y axis. What I needed to find was line x, which would translate to the height/length of the item. 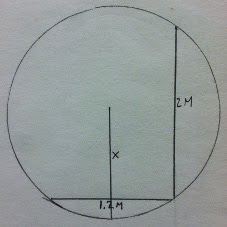 I realized very shortly after drawing this version (and reaching out for assistance), that I was looking for a solution in the wrong place. You see, basic geometry tells us that, if line x is the radius of the circle (it is) and the x and y axes meet at a right angle (they do), then the point they intersect is also the radius (and, it so happens, also the height/length of the item).

Upon this realization, I quickly added to the figure and, at that point, it only took a simple application of the Pythagorean Theorem (a2+b2=c2) to discover the height/length/radius. 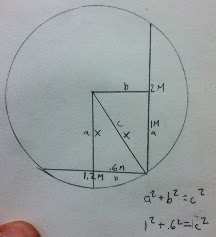 From a pure design perspective, as the 1.16 was an odd number, I opted instead to round up to 1.2. I then verified the chords (my x and y axes) continued to meet the bare minimum I noted above to ensure the design worked correctly. 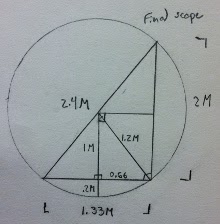 Thus, I had my height/length, and my item’s design could be finalized.

See? Don’t believe all that hack about writers only needed English or Journalism classes. Sometimes, if you want to write—or, I suppose, draw/design—you’re going to have to work in some other disciplines as well.
Labels: Art Children's Book design Eighth Book technique Updates