While I enjoyed almost the entirety of the reads this week, more than a few suffered from cliffhanger-itis, wrapping the issues with sub-par, meaningless or simply lackluster plot twists. Though some were worse than others….

I loved the ramped up action of last issue, especially as it came on top of a few more subtle outings, but while the latest in this crossover delivered even more, the payoff didn’t feel as earned or as shocking. What did shock me, though, is how easily some of the Crime Syndicate were taken off the playing field, especially given how poorly some of the villains have fared against the Earth One heroes.

Finch’s art was perhaps the best of the series, finely depicting the action and seemingly mastering the panel-to-panel transitions that worked so well last issue. Some of the action was stiffer than normal, though, particularly the panel spotlighting Captain Cold and Johnny Quick, wherein the former looked more like a Rockette than anything else.

Harkening back to my introduction above, this issue ended with a cliffhanger I’ve seen some more than excited over, yet which left me sorely lacking. I understand the relation, but as a “New” 52 convert to DC, the reveal left me confused, though the one a few pages earlier surprised and elated. If DC is focused on new readers, the company should not rely on characters completely unknown to us for shock and awe.


Were this book not drawn by Sorrentino, I don’t believe I would enjoy it as much, let alone purchase it unquestioningly each and every month. Of course, Sorrentino is only part of the reason, as Marcelo Maiolo should definitely not be overlooked, providing some of the more outstanding pieces within this issue and the series in general.

I say that because the story, which has been steadily building since Sorrentino and Lemire took over, is perhaps not as strong as it once was and the characterization has suffered in line with that degradation. It all seems too forced and fleeting, with characters that no longer seem like they could even exist, let alone be found sympathetic—and that goes for the heroes as well as the villains.

And then there’s the ending. That ending. That stereotypical ending seen in almost every superhero book at one point or another. Sure, had this been the final or near-final issue of the series, that would have been amazing. As it is, it’s only a shrug-inducing moment—one I’m certain will be resolved with utmost haste next issue.

Books released on only a semi-regular basis, such as this or the latest Sandman series, are difficult. It’s hard to maintain plot progression and excitement when issues and developments are so far apart, and while the last issue of Jupiter’s Legacy was by far its strongest, this next-up is perhaps its weakest.

Which, okay, is to be expected. It’s a development issue, after all. Nothing here will be a payoff, nothing a conclusion. Yet even the two dramatically exciting moments were practically yawn-worthy, possibly due to the lack of any sort of dynamic imagery. And while the similarities to The Incredibles are almost lawsuit-inducing, they’re lacking the fun-factor the film so easily produced.

This book was also the one with the most confusing cliffhanger this week, as we’re introduced to an unnamed character who may or may not be one we’ve already seen, doing nothing but standing still. I turned the page, expecting more, as though the book had simply forgotten to include all its pages. It’ll be interesting to see where this goes in a few months’ time, but I’m not as interested in picking up that issue was I was in this one. 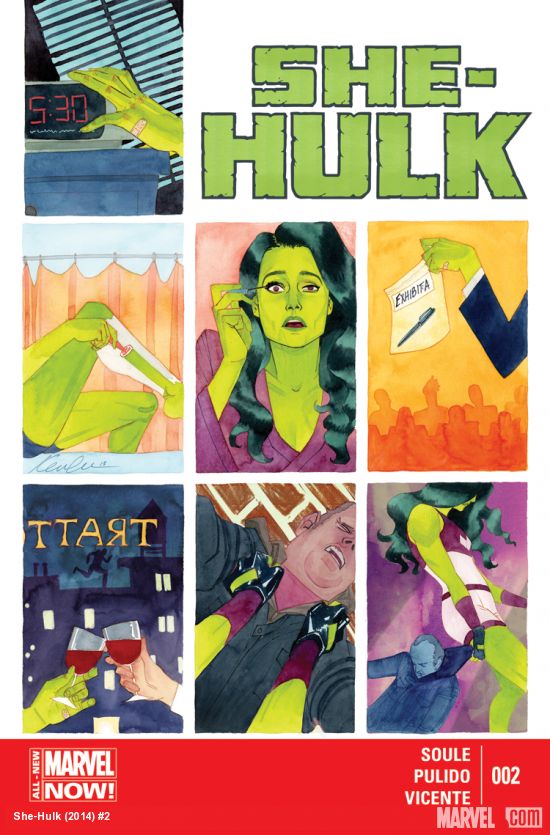 While the second issue of She-Hulk doesn’t quite reach the heights of the series’ debut, its success firmly cemented the title's place on my pull list, if only to find out why that woman carries a monkey. Seriously, why?

Did that happen to Soule in his practice? Holy crap, I really wish it did.

Anyway, while the subtleties and quiet moments of last issue carry through here, the wit is noticeably lacking and the banter a bit drier than would be expected given the addition of Hellcat to the book. The logical superhero conclusion also pushed the book to a different place than I would have expected, and not necessarily in a good way, though it did lead to my favorite panel of the issue: a two-page spread of She-Hulk’s steely gaze.

The sheer effectiveness of those pages also come in light of a continued problem I have with the art, particularly the overly wide nature of the main character’s pupils, which seemed perfectly fine in the splash. Other than that nitpick, the cartoonish designs and layouts remain top-notch, and I particularly enjoyed the callback to All-Star Superman, intentional or not.

Comparing the pace of Soule’s still-fledgling run on Swamp Thing to Snyder’s breakout hit during the New 52 launch is like finding similarities between a Model-T and a Mustang. The basics are all the same, but the story is so much more satisfying at a breakneck speed, and, frankly, I never thought I would have said that given my appreciation of Snyder’s tale.

Yet in this issue, Soule and Saiz  at once add more mystery to the Green, another level to Alec Holland, and more depth to two of the run’s more unique supporting characters. And the results are pure gold, from the idea of Wolf and Weeds running through New Orleans to twist themselves into some renewed Kingpin, all the way to the subtlety of Swamp Thing searching the house by growing from the wooden handrails.

And, while it may have appeared Swamp Thing had grown too powerful for even his own good, the fact something so pure and innocent sounding could lead to such a downfall—it’s astounding, and yet so perfectly handled.

It’s no secret this series has fallen off the reigns a bit, and my reviews have reflected that, but this penultimate issue goes a long way to putting the series back on course.

Both the story, which played second fiddle to the art, and that very art improved dramatically this issue. While the plot was barebones, it finally brought our protagonists back together and set up what seems like will be a fitting conclusion.

The art, though, as I mentioned, stole the show, with Lemire delivering some of his finest detail of the series and the watercolor adding nothing but beauty and depth to the visuals. Unlike previous issues, not a single panel seemed overly hurried or unfinished, and each seemed important to the story’s progression. I only hope this sudden return to greatness carries through to the conclusion.

After absolutely adoring the latest Turok’s debut, I thought I understood the direction of this series. However, I’ve given Pak less credit than he deserves, as the breakneck speed of this follow-up left me completely bewildered, and I couldn’t be any happier. There’s an infinite world of possibilities to be explored, and I’m going to be right there along with it.

Colak’s work certainly doesn’t hurt, either, delivering a flood of nuance and design, and while the layouts may not be as exploratory as in the previous issue, that’s not necessarily a knock against the art. In fact, the straightforward nature likely helps, and will continue to as the plot grows increasingly surprising and out-of-this-world.