In honor of International Children’s Book Day, I thought I’d push this update forward from Friday.

As of yesterday, I’ve completed all of the rough thumbs—approximately thirty or so ~2x2.5” panels required for my Children’s Book submission. Below is an example of the two we’ll be following here as the process continues. 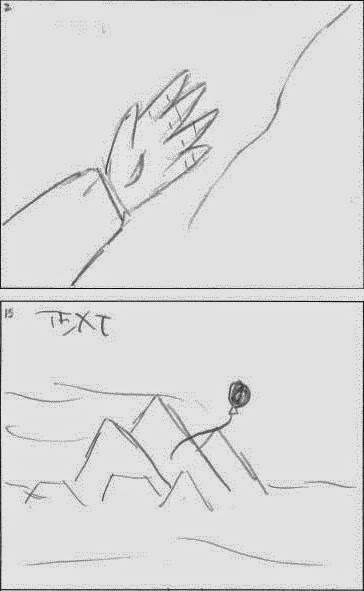 Like I said, they’re rough. And not terribly detailed. Really, they’re only meant to give me an idea of how the book will flow and to uncover any overwhelming issues.

Which, actually, occurred this time around.

Though I had stated previously the story’s text was complete, after drawing the thumbs I noticed one page unfortunately repeated imagery from two others. This made for a moderately problematic and, frankly, boring page I believe most would likely flip quickly past. Considering the situation, I opted to replace the page with something entirely different that also better compliments the imagery found on that facing it. Though it required a little more work, now the book’s all the better.

(I realize now this is the second update I’ve issued in a row with the word “thumb” in it. Must be something in the water.)
Labels: Art Children's Book design editing Updates