You know, if I keep cutting comics out of my reading pile, soon enough this won’t be a weekly feature. Only three this week and two last. Getting close… but at least I’ve gotten to the point there’s nothing I inherently push to the bottom of the pile, eh? 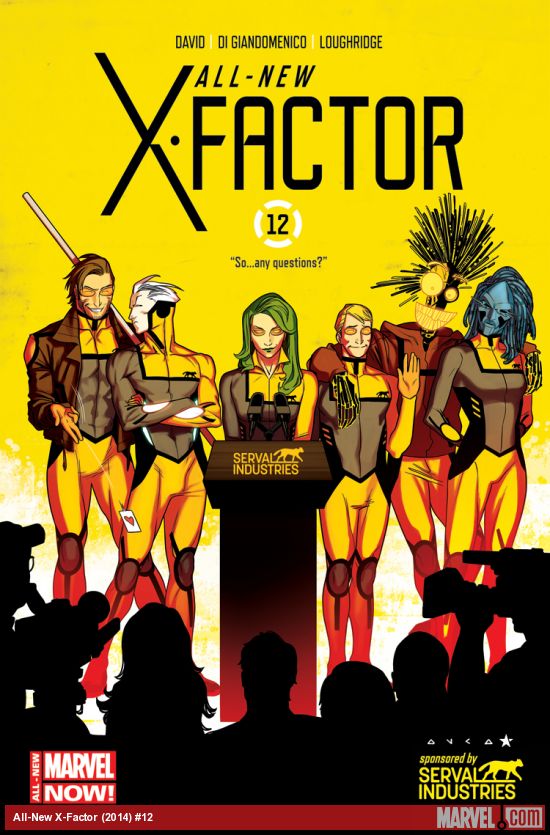 Quicksilver has a daughter?! How the hell did I miss that?

That little bit of data-drop aside, the slower issues of this series have proven to be some of the best, and this is no exception, as it’s practically action-free and devoted to building X-Factor further as a team and individuals. What makes these talking head issues read so well is Di Giandomenico’s panel work, which stifles its kinetic overcompensation that sometimes muddies the story in favor of simple expressionism that never gets in the way of what’s trying to be said.

The work with Danger and Warlock works particularly better than other scenes, and I was mildly surprised to realize this is the first we’ve seen Danger in costume. Of course, as noted above, the main character build is with Quicksilver, which makes sense in the grand scheme of things (Hm, I wonder which of these characters has shown up in two recent blockbuster movies?), though the others all achieve at least a panel or two worth of growth.

Last note: what was up with their boss? Some kind of swinger thing going on there? Wondering just how many things Gambit can make blow up with those fingers of his? Man, Di Giandomenico can draw one mean-ass creepster, though, can’t he?

Those who have opted to trade wait this series will likely have the better read overall, as the way this has been built from issue one is in the vein of a long-term television series. This is especially true with the stylistic choice of having practically zero transition between scenes, with page flips acting as simple cutaways.

That said, it doesn’t work as effectively in this medium as it does on the screen, and though it almost seems there’s a disconnect of sorts between Ellis and Howard, with a lack of weight in every final panel, it’s certainly passable and just something to get used to in light of the fantastic character work and imagery pervading every scene.

There was one oddity in this issue, though, which, as with much of the rest of the series, has little to no explanation. That is, we finally get to see the top of a tree, realizing that the legs connect near the top in what looks like an oddly-shaped box. I wish this revelation had been given more space to impact upon the reader, but as it came toward the end of the issue, I’ll be interested to see where the team takes us from here.

I’ve figured out the trick to reading WicDiv. That is, I need to read slower. I know it sounds absurd, and perhaps it’s not much of an issue with most readers, but coming from reading novels and Big Two comics every day, the juxtaposition is quite jarring.

Here, I need to read as though I’m speaking the lines out loud.

And now I’m enjoying it. Practically loving it. I wish I could go back and change the scores on the previous two issues, especially the last. Because on second reads, I liked both considerably more. And all because of that trick.

If I hadn’t figured that out, I would’ve loathed this issue. Seriously, it’s not one written for the attention deficit. One character changes design, name and personality between panels for Pete’s sake, her interactions with others shifting accordingly. It’s maddening to keep track of, but fun as hell to read through, straight through to the last scene.

It also helps McKelvie’s art strengthen considerably, as the “none more Goth” aesthetic improves the general lack of backgrounds with an abundance of black used for both atmosphere and realistic setting. And, you know? It works. It works extremely well.