Extra Life and the Story of Cameron Greenwood

Extra Life isn't that far away now. Though I've had to push it back slightly from the original October 25 to November 15, I'm no less committed or hopeful that you and other readers will be open to supporting me that day. As with last year, you can follow me on Twitter or Instagram for hourly updates on my progress, and I'll surely write a wrap up afterwards as well.

But, for now, to get you in the know about where we're at and why we do this, here's the story of 16- year old Cameron Greenwood, who received treatment at the Connecticut Children's Medical Center. 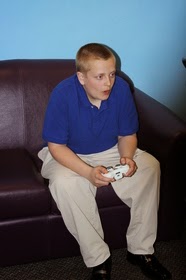 Two years. That is how long Cameron was told it could take for him to walk again, following the removal of a tumor after he was diagnosed with Ewing’s sarcoma. The surgery was successful and it was a huge relief that he’d be able to keep his right leg, but the 12-year-old’s battle wasn’t over.

Prior to his cancer diagnosis, Cameron had his heart set on college sports. But after hearing this news, his future was uncertain. The young athlete made up his mind: he was going to play sports and nothing could get in his way. Two months and multiple rounds of chemotherapy later, he walked on his own. Three months after that, he walked a 5K. Today, he also enjoys hanging out with friends, playing lacrosse and soccer and also, playing video games. He is a true fighter who will never give up on his goals.

Last year, Connecticut players raised $30,416 for the Connecticut Children's Medical Center. I, with your help, individually contributed $730. That was the best I'd done yet.

What say we beat that, shall we?
Labels: Diversions Extra Life