Formatting Part One, or: How I Learned to Stop Worrying and Love Helvetica

When I initially published The Nobodies on Kindle and Nook, I was very lax in regard to formatting. After all, readers on either platform can adjust the font and font size, so outside nailing italics, caps and chapter/page breaks, there’s not much to be done. I mean, they can’t even handle drop caps for Pete’s sake.

That’s obviously a bit different with a print version.

Not only do the size and shape of letters play a huge roll in a reader’s enjoyment, they also go hand-in-hand with the size (and cost) of the book, as well as whether or not the finished product compliments the norm on a shelf alongside others and seems in-keeping with current publishing practices. So, you know, a lot rides on getting formatting right.

To do that, there are a number of simple rules. If you’re writing, or you’ve written, an English-language fiction book (other languages and some non-fiction tend to go by their own rules), follow these:
Let’s talk font first.

I had originally released The Nobodies as an eBook with 12 pt Arial font. This is a general standard for electronic devices and maintains its legibility through several sizes without any true loss in quality, its main downside being its lack of true italics, though this is only a minor quibble to most. It was accented with 18 and 12 pt Arial Black and included All Caps for the first three words of each section. The first line was also flush left rather than indented.

For the print version, not only is Arial not quite appropriate, I specifically want The Nobodies to look and feel somewhat unique in comparison to Sanity’s Flaw. Though they’re two parts of a trilogy, they’re two vastly different books and I wanted this reflective in the look. As I had chosen Corbel (a simple sans serif) for the print version of my first book, I wanted a nice serif font for this. So, when initially formatting, I worked with Times New Roman until I had time to go through each choice.

I eventually chose to work with Helvetica for this book after narrowing it down to a small handful of options and researching their use in other works. Helvetica is a fairly popular standard, and has an amazing italic version that looks nothing like the original but blends oh so beautifully. You can see a sample in the image above.

In regard to size, I opted for 13 pt single space with normal spacing between lines. This keeps me par with Sanity’s Flaw in terms of lines per page and looks rather brilliant in print—neither too small nor too large. I did experiment with different spacing, but felt the lines were always either too crowded or too distant, with the one I eventually settled upon offering no visual difference from single space—which is, by far, much easier to format around. 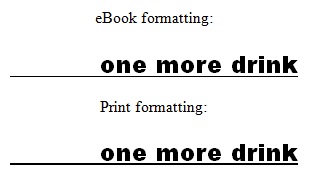 For the title and chapter heads, I opted to stick with the 18 pt Arial Black. This creates a nice dichotomy between the two fonts as well as a through line from the eBook; however, I extended this formatting a little further to other portions of the text and increased the thickness of the underline to more closely resemble the bold font. It’s not much of a change, but as noted in the picture, it’s certainly noticeable.

Choosing a font, that’s really the easy part. The fun (read: hard) part is actually getting down and dirty with the formatting. We’ll go more in-depth on those tidbits next time.
Labels: design layout Sanity's Flaw self-publishing technique The Nobodies Updates