I’ve had a productive week.

I didn’t think I would when my weekend was overshadowed with the presumed demise of my iPhone, which meant waiting in line not just at my carrier but Apple as well. Only to then be told in so many words neither could do anything to help but offer to sell me a new $299 replacement.

For the record, I fixed the issue with an empty Pepperidge Farm bag’s metallic liner. Hence the title of this post. And bought myself (not quite $299 worth of) beer instead.

As I was saying, since last Friday or so I’ve had an insatiable drive to be productive. It’s lovely when these moods hit, and I intend to take full advantage of it while it lasts. So each night this week, I’ve not only worked on my continued DIY projects, connected with family and enjoyed some time watching TV with my wife, I’ve also stayed awake a few extra hours to edit The Nobodies, work on Trezka, start a new short (short) story, finalize some graphics and perform a bit of website maintenance. 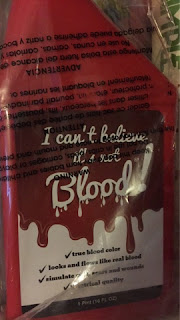 It hasn’t been grueling in the least. Yet. In fact, I feel vivacious, tireless. Above all, rewarded. The Nobodies keeps getting better and better, and Trezka, which I’ve just begun to work-over once again now that Book Four is out of my hands, is coming along swimmingly.

I’ve even concocted an additional scene for my Sixth Book. And I haven’t even started working on that outside of the outline. Though I’m itching to.

I don’t know the reasoning for this mood. I truly don’t. Maybe just some good vibes. Maybe a chemical imbalance. It’s most likely that.

Or maybe it’s the ‘I can’t believe it’s not Blood’ that came in the mail. I wonder what that could possibly be for?
Labels: editing fourth book outline Sanity's Flaw short story Sixth Book The Nobodies Trezka Updates