Finishing a book is an interesting feeling. It’s a mix of satisfaction, fondness, regret and frustration rolled in euphoria—and today, I’m riding that high once again. Because Book Four’s draft—the director’s cut, as it were—is officially complete.

Well, unlike the plans I’ve kept for the Procyk Trilogy, I will not be self-publishing Book Four. I’ve enjoyed being in charge of every aspect of Sanity’s Flaw and The Nobodies’ releases, and still plan on doing the same for Trezka, but I want to reach a larger audience. Well, and remove the “stigma” of being self-published—which, given today’s marketplace, is, frankly, complete horse shit, but I digress.

So I’m starting, as of today, to submit Book Four queries, synopses and excerpts to a number of agents in the hope one or more of those will tickle their fancies enough they’ll ask for a full manuscript. Unlike the last time I did this, I won’t be posting any rejection (or acceptance) letters along the way. I may do a consolidated list of them at the end, but I don’t want to influence any decisions by having them so visible. I also won’t be sharing the query or the synopsis for some time—probably not until the book is published (or even further for the latter). I want any and all information about this book to be absolutely controlled, and those simply aren’t ways to do it.

A note on editing

I didn’t take the final step I took with The Nobodies—that is, tallying all the words and removing/adjusting for repetition—when it came to Book Four. Without going into spoilers, this is because there’s a deal of repetition and overuse inherent to the story’s voice. Unlike The Nobodies, which was told from my perspective, Book Four is wildly different, and I felt moving or removing words and phrases that feel absolutely natural would be a disservice and simply wrong.

But, for your amusement, I did tally up the words. Here’re the top ten: 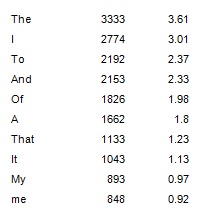 I’m rather content that I, My and Me are all within the most used—I think that really goes to show you what kind of tone and voice I’m going for here.