Some end-of-year thoughts on books

So, I read 15 books in 2017. Or there were at least 15 books I wrote about below. I feel like I maybe read one or two or three others but forgot to mark it down. Oh well. The only thing that means is I’m down a few titles compared to 2016—but only three, and I read a lot of The Walking Dead last year compared to a whole mess of non-fiction this one, so I feel pretty accomplished.

Not sure why I felt like binging non-fiction, but it was enjoyable. And I managed to sneak four novels in there just to break things up. It also helps balance the next year—which is pretty much going to be me and the entire Stephen King bibliography. If you’ve any interest in that, be sure to check the Drunk on Writing page of this site, or head on over to YouTube or Patreon for more info.

Back to the point, here’re some thoughts I had while reading this year.

(Note all links go to Amazon, but I don't make any money off them. They're just for your convenience!)

Empires of the Sea by Roger Crowley

It’s a shame that, given the current political atmosphere, we can’t make film versions of the battles depicted in this book, because each and every one of them pulled me to the edge of my seat. It’s a testament to Crowley’s ability to turn nonfiction into compelling narratives that I was sad when I neared the book’s end and immediately added his other histories to my Amazon Wish List.

Midnight in the Garden of Good and Evil by John Berendt

It’s been some time since I originally read this book, yet I’m still fascinated by its characters, and still often win the more eccentric trivia contests by describing how a gaffe works. Though not every character receives an entirely fitting conclusion, each “star” has their arc, and, given this is nonfiction, it’s all written in a manner far more fitting a novel.

The Devil in the White City by Erik Larson

I bought this book on a whim after watching a particularly interesting episode of “Timeless,” which you should all be watching if it’s still on the air, and I’m quite glad I gave in to the impulse. Interestingly, though, far more attention is given to the Columbian Fair (Chicago World’s Fair) than H.H. Holmes. Given the latter is considered America’s first serial killer, that’s rather unfortunate, but it goes to show just how little is truly known about his crimes. This certainly won’t be the last book I seek out on him. 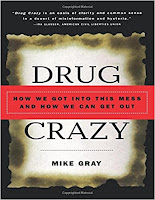 This holdover from my college days is still as infuriating as ever—not because of the author, but because of the actual history explored in this book. It made me wonder what I would do if I had the chance, because I’ve seen too many relatives fall to the tide of the drug war, but perhaps that will be a conversation for another day. 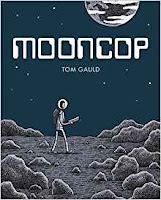 The biggest compliment I can give this book is that, after buying it on a whim, I repeated what I did with Crowley and added Gauld’s entire back catalog to my Amazon Wish List. Similar to Jason’s style in that it’s monochromatic and told in a “snapshot” style, Mooncop speaks more with the art than the dialog—something I’ve grown to love more and more as the years go on. I can’t recommend this one enough.

This book’s concept is certainly intriguing, but it takes far too long for it to truly become compelling, especially as it takes some time at first to wrap your head around the three names each main player has and which the author uses almost interchangeably. By the end, though, I was gripped and hoping for the tale not to end, even if some of the “cliffhangers” seemed to peter out and some of the more interesting information never led to much of anything.

This was a hard read. Not only was it long, it was also dated, incredibly dry and, perhaps not so surprisingly given the title, rather depressing. However, it did inspire me to launch Drunk on Writing, so I have to give it some credit. Which I did.

Packing for Mars by Mary Roach

An informative read, with plenty of jokes and anecdotes designed to make NASA more relatable, Packing for Mars generally missed the boat for me. Nothing felt snappy enough or witty enough to really mark this among the pantheon of nonfiction titles, nor did anything ever come out of the woodwork to shock me. That may have simply been Roach’s writing style, which I didn’t entirely gel with.

I Kill Giants by Joe Kelly and J.M. Ken Niimura

This was my second time reading this series in its collected form, thanks to a prompt from Kinda Funny, and I’m still glad I picked it up when I did. I Kill Giants just tackles depression, anxiety and death in such a unique way—I teared up more than once, and would be shocked to learn of someone who doesn’t, especially if they’ve ever lost someone in their lives.

After reading Leonard Nimoy’s I Am Spock last year, reading Shatner’s take on many of the same events was decidedly interesting, especially as the two recollections didn’t always mesh, leading me to wonder whose version was the actual truth; I tend to side with Nimoy as his version was written closer to the actual events.

I love this book. Which is why I did a stand-alone Dissection video on it. I think the reason I loved it is that this was a completely fresh, and true tale, for me. I hadn’t so much as heard of the Monuments Men before this (admittedly, I read the book after the movie was released, though I got my copy of the book before the movie), so while it’s hard to find something to enjoy about another rehashed recount of Stalingrad or Normandy, I almost didn’t want to put this down.

This wasn’t quite what I expected it to be when I picked it up in a Philadelphia comic shop, but seeing a more in-depth look at the creation and fallout of Tetris, which I’d previously read about in Game Over, was pretty fascinating, and led to many incredibly memorable scenes. While not nearly as amazing as the game itself, The Games People Play was certainly enjoyable, albeit at times confusing on the art-side.

Don’t read this book. I read the entire thing on my flight to Boulder, with time to spare, and then left it on a counter when there weren’t any book swaps in the Denver airport. The characterization was great, but the ending was unfulfilling to say the least despite being telegraphed from the very first page. I get now why this was dropped on seats as a giveaway during New York Comic Con years back. 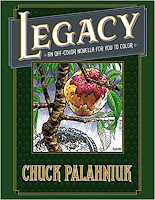 I picked this up on a whim in a Boulder book shop simply because I love Chuck Palahniuk and while Legacy isn’t anywhere near as deep as some of his other stories, it’s still lovingly told and coupled with a number of color-as-you-wish illustrations. I haven’t colored a one of them, and I’m not sure I will, but it’s a cool experiment and made my flight home feel just that much shorter.

I’ve read Schreier’s articles from time-to-time, but when he released this book, I picked it up almost immediately, and it thankfully didn’t let me down. Well-researched, well-written, and incredibly interesting, I’d say this is pretty much required reading for anyone with an interest in videogame development on any level. It also interested me in several games I’d never thought of picking up before, so, I guess it’s done its job, right?

Did you read any great books in 2017? Any stinkers? Let me know in the comments below!
Labels: Drunk on Writing review Updates video