The Drunk on Writing Scripts continue today with the Dissection of Rage, the first of the Richard Bachman books published. If you'd rather watch the video, a link is included at the bottom. 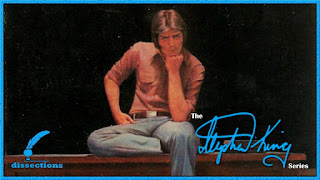 We’re going to take a break today from talking Stephen King to look at the work of another author, the late, great Richard Bachman.

Who is Bachman? Born in New York, he served in the Coast Guard and settled with his wife, Claudia Inez Bachman, in New Hampshire, where he wrote at night and tended his farm during the day. They had a son who unfortunately died at the tender age of six, and Bachman himself died suddenly in February of 1985.

All that is a lie. Except for the death, caused by so-called “cancer of the pseudonym.”

Because Richard Bachman is, of course, Stephen King. A pseudonym for Stephen King, rather.

When a collection, The Bachman Books, was published, Stephen King penned an intro called “Why I Was Bachman.” In it, he addresses every rumor I’ve heard over the years about why he adopted a pseudonym, the predominant one being his publisher didn’t want him to release too many books any given year.

What a problem to have, huh?

But the actual reasoning he gives is this: he wanted to see if it was all by chance that he became famous, a best-seller. As he put it, “It is for some reason depressing to think it was all—or even mostly—an accident.” So he wanted to see if he could do it again. Or, rather, if Bachman could.

It didn’t quite work as planned, mostly because King perhaps didn’t count on his fans being such fans as they are. They figured it out and, as King points out, Thinner, the fifth book published as Bachman, went from having sold 28,000 copies under the pseudonym to, at the time the intro was written, 280,000 copies under Stephen King.

If the experiment could have continued, Bachman probably would’ve gotten a larger following, I’m sure, though I’ve only read three of the seven Bachman books—Rage, which we’re talking about today, The Regulators, and his last, Blaze.

Though I’m reminded of that time J.K. Rowling tried to do the same, publishing that detective story under a pseudonym and selling woefully few copies until her agent outed the publication and the numbers skyrocketed.

It really is hard to push copies without a brand name or some sort of movie tie-in nowadays. I’m going to say that’s the reason my books haven’t sold more.


About 95% through Rage, I heavily considered it to be King’s best book to date—yes, better than Carrie, better than ‘Salem’s Lot, and certainly better than The Shining. But Rage is the first book of King’s that I think frankly completely falls apart in the end.

And when I realized that fact, I also realized the entire concept of the book —its entire narrative structure, in fact—was flawed. And once that happened, despite the strong writing, the strong characterization, Rage was ruined for me.

The problem lies in the otherworldliness of the situation. The book opens with a clearly disturbed high school student killing two teachers and holding a classroom hostage. It’s dark. It’s disturbing. It’s graphic.

But then Rage becomes The Breakfast Club with a handgun and a dead body. The students held hostage sympathize with their captor, Charlie Decker. They commiserate. They realize they’re just as flawed as he is, but, in their minds, in their views, he has the guts to point it out, to open the conversation, to combat the adults trying to put them down. They see him as a hero.

And though I didn’t realize it at first, Rage is odd from the very beginning, right from the moment Charlie kills the teacher. Let me quote here:

“…nobody said a word. They sat in utter stunned silence, looking at me attentively, as if I had just announced that I was going to tell them how they could all get passes to the Placerville Drive-In this Friday night.”

And a few lines letter:

“…Irma Bates broke the silence with a high, gobbling scream that sounded like a young tom turkey getting its neck wrung on the day before Thanksgiving…. Nobody picked up on her scream, and she stopped, as if ashamed at screaming while school was in session, no matter how great the provocation.”

Look, I get shock. I get that, in otherworldly situations like this, ones we hope and fear and pray we never have to face, you don’t quite know how you’re going to react until you get there. But, and maybe it’s just me, I don’t think I could just sit there in stunned silence after my teacher was shot in the head.

Then again, I remember a fight I had in high school where the whole class, teacher included, seemed glued to their seats, in utter awe and bewilderment as I was exchanged shoves with a kid I didn’t even know, then got punched in the face. Even I wasn’t sure what was happening. I actually paused the fight to go pick up my glasses. True story.

So, okay, maybe kids would react this way. I’ll give King, Bachman, whatever, the benefit of the doubt. And maybe they would exchange stories after listening to Charlie try to convey why he is the way he is, his stories of his abusive father and sick mother, of his sexual issues—the stories everyone who’s grown up and passed through high school seem to have.

We all have some variation on them, I think. Maybe not the abusive parent, I don’t really have that and hopefully the majority of you don’t as well, but there’s always something. That girl whose house you went to during a snowstorm because she said she was going to kill herself, only to find her drunk and desperate for love. That boy who takes you to a parking lot after prom to find out what’s under your dress.

These are things people go through, whether we talk about them or not. And they’re not always the sorts of things we’d bring up on social media or talk about on YouTube. If it’s not going to generate clicks or views, chances are it’s not coming up. But still, they’re there.

So, sure, all that could be believable as well. But the ending? No. That ending. Ugh.

And, you know, King/Bachman sets it up. The seeds are planted throughout, but it just doesn’t work. How a seemingly rational classroom filled with seemingly rational students could, without any real provocation, gang up and seemingly beat someone in the class to the point they’re in a coma is just… it’s not real. It’s not earned. Lord of the Flies this is not.

This is forced. To… to teach something I suppose.

But it ruins the book. Poor Ted, he ruins the book. He’s just… not real. He doesn’t work as a character, he doesn’t work as a conclusion. Everything that is great about this story—the back and forth, the characterization, even if Charlie never once comes across as anywhere near sympathetic, the attempt to take him out, the way that one girl goes to the bathroom and then actually returns to the room—it’s all for naught because the story depends on us as readers crossing this line, the terminator as noted in the book, on us crossing the line with the characters.

But maybe we don’t, and I maybe I don’t, because I’m… what, sane? Maybe this just doesn’t hit me because I don’t have the issues Charlie obviously does, the sort of mental health issues almost every single school shooter seems to have?

So maybe it’s a good thing Rage is now out-of-print.


I got my copy of Rage used on eBay, in a first edition printing of The Bachman Books collection. The original book is prohibitively expensive now.

I think it was King himself who asked for the book to go out-of-print, as it, in much the same vein as Catcher in the Rye, did seem to tap in to the minds of those few readers who related with the main character.

And who, finding some sort of inspiration, started reliving the novel in horrifying ways.

So, yeah, after all these, King took Rage out of print. It was part of The Bachman Books a bit longer, but new editions, like ones you could buy at Barnes & Noble or Amazon right now if you felt like it, don’t include Rage.

But, should it? Should Rage be brought back into print? About halfway through the book, I thought maybe it should be. I thought, maybe a story like this from such a prolific author as Stephen King would help people better understand the mental health issues facing our nation, especially our youth. That every person has their demons, and some people simply lose themselves to those thoughts and memories.

But Rage doesn’t do that. There’s a point to be made by the book, surely, but it’s too jumbled, too esoteric to be clear. And if the book helps trigger mass shootings? We have enough of those. We don’t need any more.


I know this Dissection came off rather negatively. I can’t help it. It’s the first letdown in the series—like I said, I’d thought this book might be the best of the best, but it devolved into my least enjoyed yet.

King released a follow-up of sorts to Rage called "Guns." It’s a non-fiction essay he penned after the Sandy Hook elementary school shooting in 2012. It expands on why Rage and that version of The Bachman Books went out of print, and, as described on Amazon,

“In a pulls-no-punches essay intended to provoke rational discussion, Stephen King sets down his thoughts about gun violence in America.”

Best of all, all profits from its sale benefit the Brady Campaign to Prevent Gun Violence.

We won’t be covering Guns as part of this series, but I recommend you give it a read. And  if you feel compelled to donate to any gun control or mental wellness organizations, I urge you to do so. Because I’m sick of kids being killed.

Have any thoughts on this, or on Rage? Leave a comment below!
Labels: Drunk on Writing review