My apologies if there are typos or otherwise below--I simply didn't have the time today to go full editor. Oh well, at least there were some great comics this week, huh?

In comics, it's typically the little things that matter. The small details. The ones that build the universe and bring readers into this stylized reality. So when I'm reading Bodies and notice a poster in the background that reads MURDER only to then have the poster read MURDERED come next panel's close-up, a little part of me screams bloody... well, murder.

Am I a bit nitpicky? Sure. But typos, errors--they're the kinds of things that stick with readers, even in a book as great as Bodies. And yes, Bodies is certainly great, with plenty of developments and characterization in this issue to warrant a second or third read through.

Not all of it is overly strong, though. While interesting in their own right, the 2014 and 2050 portions are definitely weaker than the other half, the 2050 section suffering from the amnesiac writing, which makes stringing a plot along a bit tiring. That ending, though, taking place in 2014, has me quite intrigued. Exactly how many bodies are there, and was it the person suspected from the forties? Or someone else entirely?

My money's on the latter.

After a few lackluster outings, this issue is a welcome and solid return to form for this zany series. The insane caricatures of the main players, especially Johnson (what a character, eh?!) bring so much joy, levity and depth to this series--things sadly lacking in the relatively aimless issues of late. There could have been a whole issue centered on just the interactions between Kennedy and Johnson and the nameless hooker, it was that great. Seriously great.

Pitarra's art is just... incredible this issue. He just packs in detail after detail, filling background to the brim at a time when too many artists simply ignore the negative space. The first page alone held my attention far longer than it should have. I simply sat there staring at the vast array of randomness strewn around the Presidential Seal. How could I not when there's lions and blowup dolls and Hamburglars and pinatas and gimp masks, oh my? 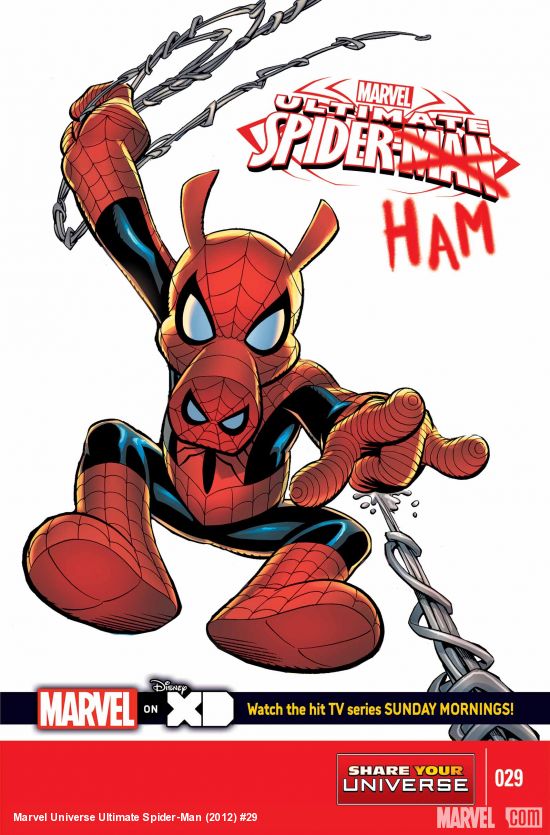 An extremely fun romp through a blend of the Marvel cinematic and publishing universes, this it the first and only book I've purchased in this all-ages title--done simply for the fact the cover is nothing but Spider-Ham.

One of the great things about this CG-heavy (I believe the art is simply taken from the TV show, though I'm not exactly certain) one-shot is its lack of hangups from the "adult" line, which makes it perfectly acceptable and walk-in friendly. I mean, I think that's a great thing for kids, and the blend of new and old works incredibly well. And why not? It's what they'll know the best, right?

Well, why wouldn't that be his head?

I should've seen it coming. I should've expected it. And yet, after I turned the page to that glorious spread, I couldn't stop laughing for several minutes. That's just the way Vaughan and Staples like to play with us--delivering a perfectly serious, and at times somber, scene simply flooded with physical humor. It's like something straight out of Shakespeare. Well, if Will had known the difference between HD and tube.

I'm intrigued, though, as to Vaughan's decision not to follow Marko at the end of the issue. The last we see of him, he's turning away, presumably running into a foggy dense of forest, and then we hop, skip and jump over to the Open Circuit. I would have liked to see an immediate fallout, or at least the hint of one, such as him knocking on Ginny's door or something similar. And while the actual ending was still fun and surprising, it just didn't seem to fit properly here, as though it should've been the start of the next issue instead. 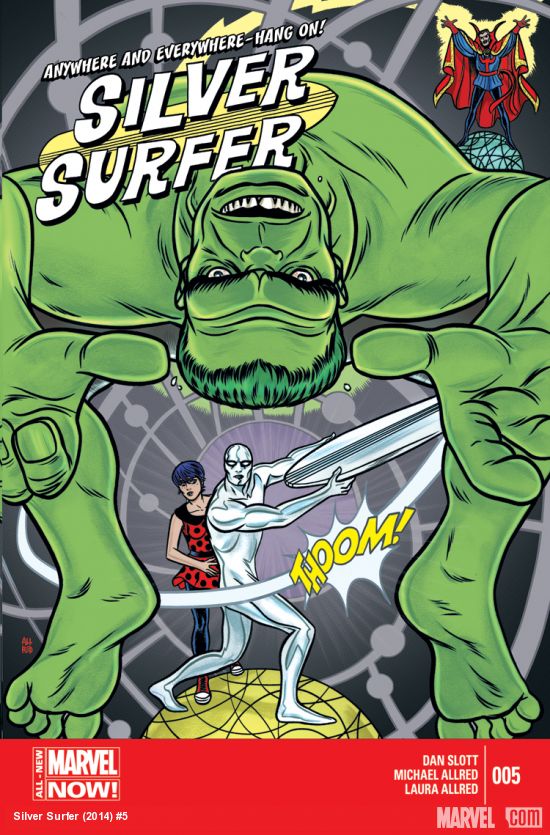 Slott should write Doctor Strange. Hell, he should probably write the Hulk, too, while he's at it.

That said, the conclusion to the book's first true arc is likely its weakest since the relaunch, being slightly heavy in borderline-confusing exposition, though it sets up the ongoing storyline going forward nicely. Really, this issue reads like a different take on a Doctor Who episode, especially with the way Dawn was utilized as the story's hero. Seems just like something Matt Smith would've done with Amy Pond, doesn't it?

I loved the layouts this issue. I know I've seen the technique before, but Allred's depiction of the ongoing Hulk/Strange tussle along the bottom, with Norrin/Dawn above worked very well, accented nicely by the frenetic panel shapes. Laura's colors were top-notch as well, offering even further detail than even Mike depicted. The two are a simply wondrous team.

Go ahead and take a look at Superman's face in the first panel of the sixth story page. I'll wait. Why is that line there? Did he grow a jowl mid-sentence? The face would be perfectly fine without it--in fact, it'd most certainly look better than it does here, as Superman/Clark have far better depictions in other points of the book. I'm not certain if the blame should fall more on JRJR or Janson for simply overly heavy inks. The latter only really appears at the start, and lightens as the story progresses, though, so it's a minor quibble.

As to the storyline... you know, I would've done the exact same thing given the situation. Well, maybe not as harshly. But close enough. It was around that time, though, that I noticed how formulaic this entire encounter seems to be, complete with the necessary roughhousing between the two leads. The only bit that saved it was the end, which twisted the expectations on their head a tad. I wish there was more that that.