This week was really disappointing overall, aside from an incredibly strong debut, but I did change one aspect of the reviews: every creator involved is now credited here, when possible. It just seems right.

The other night, I tweeted this out about Bodies:

If you're on the fence about @SiSpencer's BODIES from @vertigo_comics, don't be. Buy it. It's great
— Warren Pawlowski (@WarrenPawlowski) July 31, 2014


Today, I continue to stand by that, and after thinking on it, I’m positive the debut of this new Vertigo series is the strongest of the bunch I read (and there were quite a few I was waiting to read)—quite a feat, given I didn’t decide to buy it until I picked it off the rack.

The comic is practically four-in-one, and if I didn’t know Spencer was the writer for each, I would have thought it was a neatly-tied anthology instead. Not only are the artists different (more on that in a moment) in each segment, but the characterization, the coloring, the typography and even the motivations are wildly varied. Huge props to all involved, especially Sienty, Esposito and Loughridge, who stretch their imaginations here.

Depending on your personal preferences, you’ll like one segment or another more art-wise; personally, I gravitated toward the second and the fourth segments (Ormston and Winslade), as I prefer the noir-inspired looks, but Hetrick and Lotay churn out some extremely memorable scenery, with Hetrick hands-down delivering the most graphic, haunting image of the titular body. This is just amazing, from every angle. 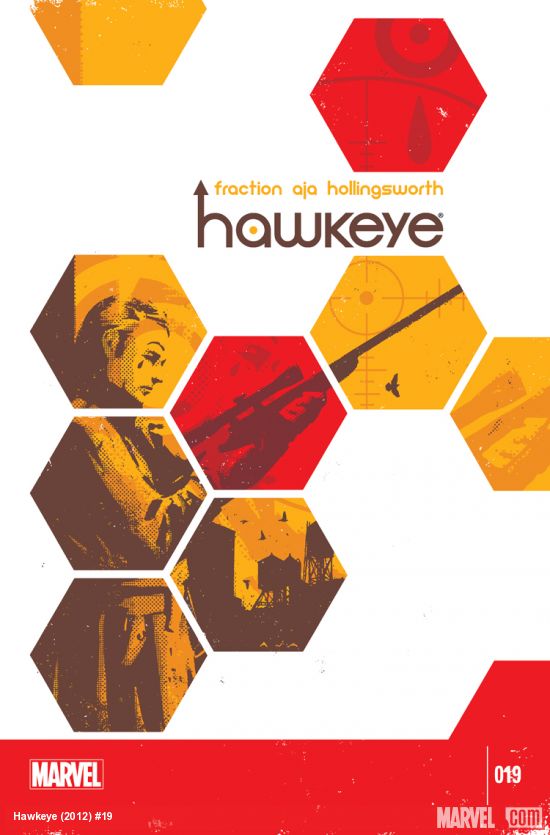 I’d been looking forward to this issue since it was teased seemingly years ago, and especially after the cliffhanger that was issue 15, thinking (hoping) it would be akin to the rather fantastic Pizza Dog issue.

I mean, seriously, I have a shirt with that issue on it.

Maybe it was my high expectations, or maybe the creators’ intent, but this issue simply didn’t work for me. I can see what they were going for, and that intent I mentioned is rather clear (Fraction and Aja both compared expected readers’ frustrations with those of the truly handicapped), but the need to do outside research to find the true beauty of this issue (let alone understand certain parts) vastly reduced my enjoyment.

Having looked up a translation (which would have helped at the end of the issue itself), it seems clear some of the signs drawn into the issue by Aja were either incorrect or intentionally misleading. The rest was as impressive as ever, though, and, while I may be wrong here, the inks seemed heavier than I remember, the details less nuanced.

But, there was that ending. Somewhat confusing, sure, but damn. Next issue, please.

If I got together with a group of my friends and asked Mahnke to draw us, I bet he would pose us as though we’re all coming from one side of the page and somehow or another slightly higher than whoever is immediately in front.

Because that’s every team picture that’s appeared in this book lately.

It’s not ugly. Far from it. It’s rather pretty, really. Unfortunately, though, the same pose, the same layout has appeared several times in recent issues, and its prominence is growing tiring.

There are other ways to effectively show a team’s lineup, but Johns also introduces the new Doom Patrol lineup in typical fashion, introducing them to a new recruit before throwing them headfirst into a conflict that questions and establishes their morals. It’s nothing new, and was only complicated by the repetitive mentions of their powers, particularly Negative Man’s, which I found I didn’t understand by issue’s end. I suppose the characters have some endearing qualities, but in this instance, they fell completely flat.

Someone rushed this book out the door.

Within just a handful of pages, I found three rather cringe-worth titles:

Now, I get it. Sometimes this thing happens and a typo or two gets out the door. I point them out when I can not to be a dick, but to help the publisher correct the error(s) in future editions and improve the reading experience. But three? Ouch.

Unfortunately, had the issue been error-free, I’m not sure it would’ve read much better, as it was fairly lackluster, acting as something of a catch-all for every aspect of the ongoing plot while introducing new threats that could have used (and provided) more development. This simply reads as setup for future issues, future plots, and though those seem like they’ll be entertaining, my hope is they’ll be nothing like this.

Thankfully, Pitarra really gets a chance to shine, bringing a number of locations and characters to life with the kind of subtle detail that would put many other artists to shame. His background work is especially significant in a time when many simply ignore that portion of the world in favor of highlighting the main characters, but Pitarra uses them to great effect to create an atmosphere unlike any other in mainstream books.

Reading the issues when they’re released no longer makes sense. There are such long gaps between that the first several pages of each is all about catching up and trying to remember where you left off.

It doesn’t help when those pages don’t directly follow what you were expecting, either.

Perhaps that’s the problem with Overture: it caters almost solely to the long-term fans of the series and doesn't even attempt to appease the general reader. Having read Sandman in its entirety (once), some of the references continue to go over my head, this reading as something of a love letter to the most devoted, those who’ve analyzed and reread the series ad infinitum.

My advice is to wait on the eventual trade. If you really like individual issues, buy them and store them and when the final issue is released sometime next year, only then should you go back. You may want to ogle at Williams’ work, and I certainly can’t fault you for that, as it’s easy to get lost in the imagery, though this issue doesn’t flow as easily as those previous and the work is becoming increasingly convoluted with alternative layouts and an overuse of ink and color.

Note: The credits in this issue are impossible to read, and only include last names. The DC Comics website also does not include full credits, so I've only included those on the cover.

A common theme from this week’s comics was enjoyment outside the singular issue. That is, to enjoy the work, you need to know more or remember more.

The Wake’s finale is one of those comics, as its exposition-heavy and overreaching conclusions don’t pay off well for those who’ve read the series over the majority of the last year—reaching back to the first issue, picking up small points almost glanced over from those between. That’s not to mention the actual takeaway from this issue’s revelation, which still baffles me (though based on other reactions to the story I’ve read, I understood the narrative as correctly as any other reader).

Murphy’s art is a wonder yet again, even with his reported injured hand, and offers not only single-page spreads but a full splash to convey Snyder’s elaborate explanation. At times, the relationship between the art and the narrative seems to fail, though, notably at the beginning regarding a hook in a neck, and the first and last panels’ depiction of a slightly modified protagonist for which we never receive any explanation.

If you’ve yet to read any of the series, I’d recommend picking up the trade, as I’m certain this will read far better in one sitting.