Apologies for these being a bit late, but I've been killing myself trying to put in a new hardwood floor and having to build and rebuild the kitchen almost daily is taking a toll on my energy level (as well as my free time). More on that soon, hopefully, but for now, please enjoy some reviews: 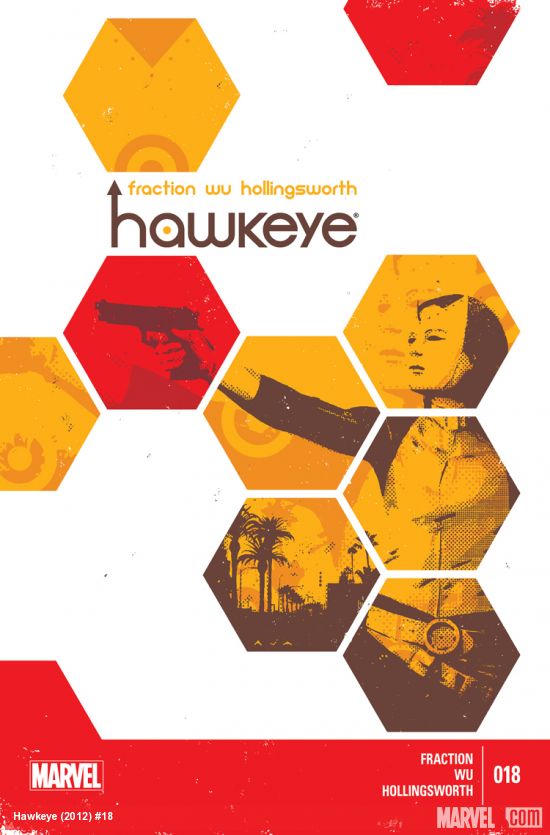 Well, that was a bit of a downer.

Then again, how cool was Harold H. Harold's story? That's the exact kind of thing that'd go down in the Marvel Universe, and while, as a reader, I find it just more of the cliche stories that could be in any magazine, it was absolutely fantastic seeing Kate's reaction. Her relatively brief time as a superhero leaves her still surprised by such run-of-the-mill plots. And that elevates those same bits to completely new heights.

The art this month was extremely hit or miss. Great at times, with intricate details and perfectly constructed facial expressions, there were also times when the imagery was nearly abstract or unpolished. I did like the layouts, though, especially within the action scenes.

Manhattan Projects no. 19 by Jonathan Hickman and Ryan Browne | Image | $3.50

After the gold that was issue 17, I didn't expect they could follow-up with anything near as great anytime soon. And, while that partially holds true, Hickman and Browne, with, I believe, some assistance from Nick Pitarra, deliver another near-perfect entry.

What hurt this outing is how much it depended on events we've already seen, even if it was from a moderately different perspective. That's why I believe Pitarra had a hand in this issue, though he isn't credited anywhere. That said, and if true, the two styles merged very well, and it was great to see the conclusion to the Oppenheimer Civil War, even if that was the weaker bit of the issue.

And, shit, that cliffhanger? That had me hollering.

Outside of a few key transitions, I have absolutely no idea what happened this issue. I really don't.

Perhaps I was stupefied by Williams' senses-shattering art, though I think Gaiman's script was simply a bit obtuse this go-round. Seriously, though, the pages are some of the most beautiful stuff I've seen in quite some times, and even though they look terribly complicated, there's never a question of story progression. There's always a logical path for the eyes to travel, and right there is where the next beat takes place.

I will say I don't believe the art was as perfect as the first issue's. The few pages wherein the framing tool is the ruby came off a tad lacking and repetitive, and that really dulled the book's middle. Again, much of that could be the script, which simply flew a hundred feet over my head and may do better on a second, or third, reading.

Okay, I know I've given Chaykin some shit in the past for the layout, specifically in regard to the placement of dialogue (last issue was a perfect example of that). But, while it could be this particular issue or storyline, I have to give credit where it's due: I had absolutely no trouble following anything anywhere this time.

Which, you know, is a great thing.

I like the direction Fraction has taken Mike, and the whole cast of characters, really, though part of me thinks it hasn't been entirely earned. Not the part about having sex with the extras or dabbling with excessive alcohol, but the other part. He's surely his father's son, though, I'll give him that. Based on my reaction to this issue's cliffhanger, I've decided it's been far, far too long since I've watched Firefly, because I simply don't remember who that character is meant to be.

But that's something of a problem I've had every issue of this series: it's difficult to imagine the characters outside of the actors who made them so prolific, and, as at the tail end of this issue, when one changes his outfit, it becomes extremely hard to place him. Sure, there are only so many characters, but until there's a named reference or I see their familiar uniforms, I'm not 100 percent sure I'm reading who I'm supposed to be.

Ongoing issues with the art aside, as a relatively calm interim issue, this came off quite effective, with several strong character moments. Most notable was Kaylee, which is a great change of pace for her considering she's hardly had a word yet this series.

My immediate thought upon finishing Silver Surfer no. 1 was that I'm not certain the book is worth $3.99. It's a real shame that the price of comics continues to be an issue, but at this point, it has to be. Reading DC's $3.99 books, like Batman, which has a card-stock cover, glossy pages and some of the best scripts and art of any book on the stands (or even some of the $2.99 books, which offer much the same), and then coming to this book and its flimsy, practically see-through cover and pages... well, it's sad.

And that's no knock against Allred's art. If you read my reviews of his last book, FF, you'd know I really dig his stuff; this book is no different. He delivers some fantastic design work and reliably smooth layouts. But Slott's script is a bit too... Silver Age for my liking. Hopefully, the second issue (which I'll definitely stick around for) will build upon the hints of modernity witnessed here, but I can't say for certain whether I'll stick around beyond that to follow Radd's next journey.

Well, that was a cool ending, wasn't it? Sort of a Captain Nemo meets the Wizard of Oz sort of spin. But, while that was a welcomed surprise, I was a bit taken aback by yet another generic ripoff from Waterworld, this time in regard to the many men rowing the large yacht. Couldn't they find a more effective way to travel?

All that said, the dialogue this issue was just extraordinary, with just the right balance of intrigue and persona, the characteristic Snyder talk shining through even in the post-apocalyptic world. Murphy's work, combined with Matt Hollingsworth's gorgeous colors certainly make this a pleasure on the eyes, as well, with some prolific use of blacks and whites to demonstrate size and scope. That's a factor missing from too many other artists' repertoire, but Murphy truly nails it.