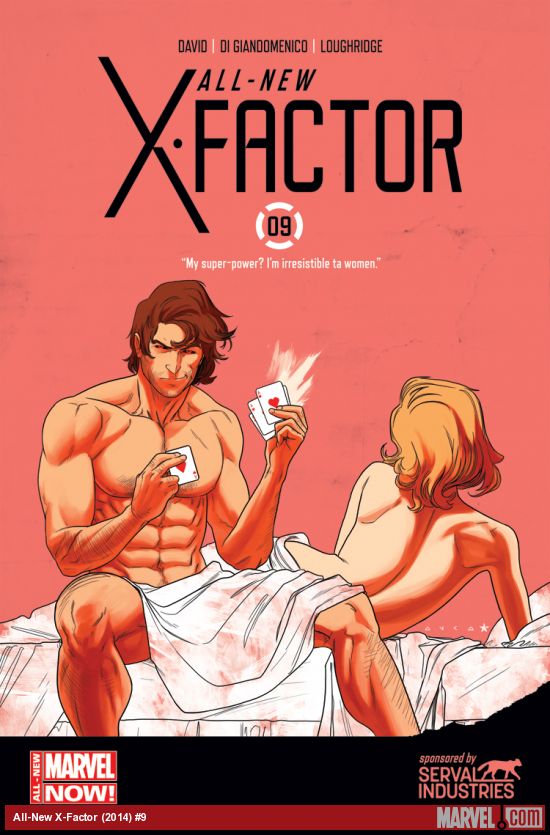 Probably the slowest issue of the series to date, this is actually one of the stronger outings in a few ways, particularly for Di Giandomenico, whose layouts and designs come off much tighter than those previous. None of it was particularly shocking or outstanding, but perfectly suited the storyline and allowed nothing short of full immersion in the story.

One note: was the bra on the first page under the hand originally there? I'd guess not.

Story-wise, it seemed like the book was running a little faster than what's good for it, as it was somewhat lacking in development for anyone outside Gambit, who is allotted an extra-long monologue across a page that ends with him picking someone up Bond-style. It was also sorely lacking in Warlock and Danger, who I've quickly come to appreciate as the heart, soul and witty humor of this book.

Is it serial killers that heroes and villains in the DC and Marvel universe are based upon? It's serial killers and psychopaths that all have father issues, right? How many times have we been dragged through a parent's death or betrayal or murder or abuse?

So, seeing such a generic origin for what had been shaping up as a memorable antagonist--it was kind of a let down.

That portion aside, Ollie's interactions with the D-List Hit Squad was a great thread, and makes for a nice break given the heavy drama of the past several issues (while also tying Green Arrow more closely to the depiction in Justice League United). Diggle continues to be an oddball for anyone who doesn't watch the show (at least I assume), in that he's slapped his way into continuity and dragged himself into the ongoing plot.

Sorrentino once again shocks and surprises, this time delivering another stylistic choice for Dragon's flashbacks. These differentiate easily from the other, moodier elements, which, thought they continue to work well for the series, make we miss I, Vampire each and every issue.

There is no subtlety here. There is abstract, yes, but definitely not a single ounce of subtlety. Everything you expect is here and then some, including children getting beaten and beating others, and mummified cyborg ghost things.

It's rather brilliant, really, and made all the more so by Andrews' owning every aspect of the title. I can see where he's come from; I find a personal cheer in not only writing up the story, but also designing covers and other art, as well as doing interior design. It makes the book exactly what you pictured and no less. And I'm loving being taken along for the ride here.

I expected more rehashing of the storyline going into this issue, and while that happened yet again (the characters actually joke about it, as if that makes it any better), the last third of the book is twist after twist after twist. No joke. One was unfortunately already spoiled by solicitations, so that was no surprise, but the rest were rather huge.

Despite that, though, none of them really hammered home the way they might in another creative team's hands. Don't get me wrong, I enjoy this book for what it is, but it simply doesn't seem as strong as it could (or should), both in the writing and art. None of it truly gels and, frankly, I wouldn't be shocked if this book were coming to an end sometime soon (not to mention the story already seems set up to go that route if needed).

If you're not reading Swamp Thing, and are considering giving it a chance, do yourself a favor and just open this book up to the first page. Look at it. Read it. Enjoy it. Love it. It says all there is to say about the book, and if you don't like it... well, good luck to you.

The beauty of this issue is that it works whether or not you read last week's Aquaman, allowing those who read both a little extra and those who simply wish to keep to Swamp Thing a breather (though I imagine those who only read Aquaman would be bothered not picking this up, as I'm doubtful it will be followed-up further in that series). Soule simply provides a wonderful piece that stands on its own, explores a portion of the character's world we've never seen before, and leaves you hungry for more--something not typically said about crossovers.

I would be remiss not to mention Saiz, whose opening splash defines this issue, but who also deftly succeeds at delivering a memorable tale at once very fitting for this beautiful series but also completely its own.

The further into this series we move, the more the book relies on Murphy and Hollingsworth's contributions to tell the story. And while that's unfortunate in a way because Snyder's now proven he can handily craft a compelling tale, the art team absolutely kills it this issue with two montage-like pages similar to the one found last issue. Not only that, there's a spread that, despite some odd angles, could easily be slapped up on a wall without a problem.

All this serves to hint at a larger world than we've seen in this maxi-series, and a multitude of ideas skipping around Snyder's head. I'm particularly interested in the babies who trap their ageless bodies in robots, which are sadly seen for but half a panel. Kudos to the creative team for sticking to their storyline, as the different aspects of this world could have easily allowed this to reach ongoing status. Perhaps we'll see more down the line?