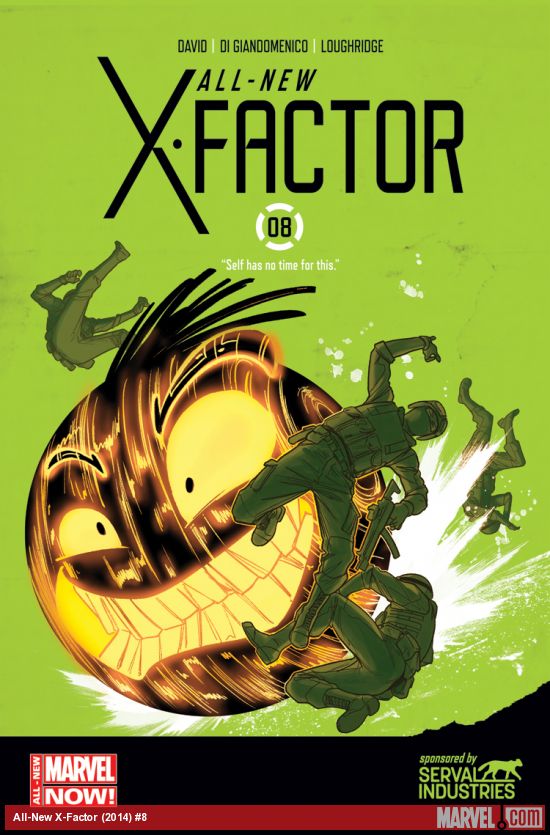 Wow, that got kind of dark.

Coming out of this book, I couldn’t help but once again consider Tom Brevoort’s remarks in regard to authors commenting on characters’ deaths through those same characters making light of the situation. In this case, wherein it’s laughing at the potential for death rather than at an actual death, I believe it works, though. It’s kind of the same way we joke about walking away from car accidents all the… ah… you mean… wait.

We don’t all do that?

Di Giandomenico’s work this issue was tight and serviced the storyline, making excellent use of compact paneling, specifically in regard to Polaris near the book’s climax. The sequence following the team searching for water was oddly constructed, though, as, combined with that portion’s dialogue, it was never clear to what or who Warlock was referring. Three reads of that scene later, I still couldn’t quite get it.

While the opposite could certainly be argued, as the book certainly offered plenty of setup for upcoming series, I appreciate Forever Evil actually offering something of a conclusion. I appreciate it even more for being an actual fulfilling one.

There’s a plethora of character beats here, along with an astounding number of twists and developments all wrapped in a handy action-packed issue. While most of these delivered, some, such as the relationship between Lex and Bizarro, proved far stronger and others (I’m looking at you, Firestorm) fell almost entirely flat.

What hurt this issue the most, other than the delay, was Finch’s inability to polish his pages. The key moments are top-notch, of course, but between those are extremely sketchy and malformed individuals. The tight paneling also made even the extended page count feel overly crowded, though that may have been an effect of biting off more than should have been chewed here.

One final note on this book: While I enjoyed it more than I have most other “event” books since Civil War, the final page left me only confused. Was that supposed to be a threat? Perhaps longtime DC readers will get more out of it.

P.S. How the hell did I not realize who Alexander Luthor was in the previous issue? Man, that was dumb.

I can’t put my finger on what is deteriorating this series so quickly. Looking back on my reviews, I genuinely enjoyed the first arc, yet this second has consistently resulted in lower scores.

Is it the art? Well, while it may play its part in keeping some of the action less-defined and impactful, I can’t blame it entirely. The story then? Perhaps. The dialogue, surprises, conclusions and other bits simply don’t carry the same weight they had earlier. It’s as though these were parodies of the characters from the first arc, pumped to an extreme that borders and, at times, crosses on completely unlikable.

After reading this issue, I contemplated dropping the title. However, I looked at the solicitations and the next publishes in July with the previous arc’s artist in tail. Perhaps some of the magic will be recaptured. Perhaps not. But, I will wait until then to decide if I continue onward.

This book is like a Bud Light. It’ll hit the spot when you’re really looking for a comic, but you won’t necessarily enjoy it.

It’s too campy for me, I think, especially with the glut of heavy-handed accents. That, and there’s simply too much going on. Like Future’s End below, this suffers from too many plates in the air that seem to have no cohesion. While I enjoyed this series as a distraction from the other, more serious, books, I’ve come to the realization it’s simply not my bag.

This will be my last issue. Though I’m sure some continue to find this book enjoyable, something’s got to give for me.

I made the right call in reading the Forever Evil finale before this, as this issue seems like a direct follow-up to that conclusion. What more, it provides some welcomed characterization to build upon the key outcome of the event, and pushes Justice League in a completely different direction.

One that, based on this issue, I’m going to love.

Lex is simply stealing the show, and his inclusion here is quite simply a game changer—not only for the series and the other characters, but for him as well. Though there were some odd pacing choices here, and a few hints without any sort of payoff, the fact this book works without even reading Forever Evil (it recaps the main point in an effortless, understandable manner without going extra expository on us) makes this even better.

Unfortunately, Reis’ art doesn’t meet the same quality, as especially medium and far shots seemed to suffer. One scene in particular, and you’ll realize which I’m talking about as soon as you get to it, makes the Justice League look more like lifeless mannequins than believable characters. It’s a real pity.

This poor series seemed to hold a lot of promise at the start, but after floundering around developments in other titles and becoming ensnared in event after event, churning through storylines far too long, it’s a good thing this is coming to an end.

This issue sees little difference from the other Forever Evil tie-ins, though this is more follow-up than anything else. It works better as a conclusion for the series rather than an individual issue, and sets Justice League United up in a way that would have benefited that title were this released a month ago.

The art was fine, if slightly more articulate than the past arc, though the colors seemed washed at times and a few of the splash pages seemed overly hokey. That said, I did enjoy the look at Forever Evil as Stargirl imagined it—the spread would have been one of the most epic scenes in that mini-series if it had actually taken place. It’s unfortunate a few of the characters seemed to be hopped up on Joker gas and enjoying getting their faces kicked in, because otherwise I would recommend it as a future poster.

I need to sit on this over the next week, because while I find this book and its general direction interesting in an alt-universe, “what if?” kind of way, it’s simply not quite grabbing me.

I think the problem is there are too many plots churning at their own paces. We’ve got Mr. Terrific changing his clothes, riding an elevator and heading to a car before choosing to finish a sentence. We’ve got Grifter reading through an exposition and commentary-prone index walking through a brick wall. We’ve got Firestorm being his awful self. And we’ve got Terry/Batman looking like a bum. At least, I think that was him. Where’s it all headed? Besides that, do I really want to know? Do I really care?

The art, which is its most basic yet for this series, is likely the best part of this particular issue, though, like the last, it was nothing special in the least. It does its best to tell the story and nothing more.

Just before reaching the final page, I was marveling at how accurately Vaughan portrays Marko and Alanna’s relationship—moreso than any other fictional relationship I’ve ever seen or read about, at least to today’s standards.

Then I read that last page. And even the shocking image that opened the book flew from my mind.

This is why Saga is as special as it is. Even in quiet, rather tame issues such as this, it delivers the extraordinary while exploring that to which we can so easily relate. Of course, Staples on art duty certainly doesn’t hurt, either. If only all our lives could be put to paper as beautifully as she makes Hazel’s appear.

In that it relies almost entirely upon the art to tell the story, this issue is heavily reminiscent of one I loved not that long ago. And yet, despite the similarities, I didn’t enjoy this one nearly as much.

Don’t get me wrong. This was a fine read. Fun, in a lot of ways. The page that followed the bullet through a man’s head was simply divine. But, I think what bothered me were the three soldiers. Perhaps it’s just these are different sorts of individuals, ones trained to do precisely this, but after being shot and stabbed, and after one soldier is walking around on a foot that seems it’s about to fall off, my suspension of disbelief began to wane. Why did they feel so compelled to kill this woman after taking such heavy damage? After their leader had been killed as well?

It bugged me. I think that’s what did it. It simply didn’t feel natural.

Maybe I need to read it again.