Holy shit were there a lot of books this week. I need a drink. 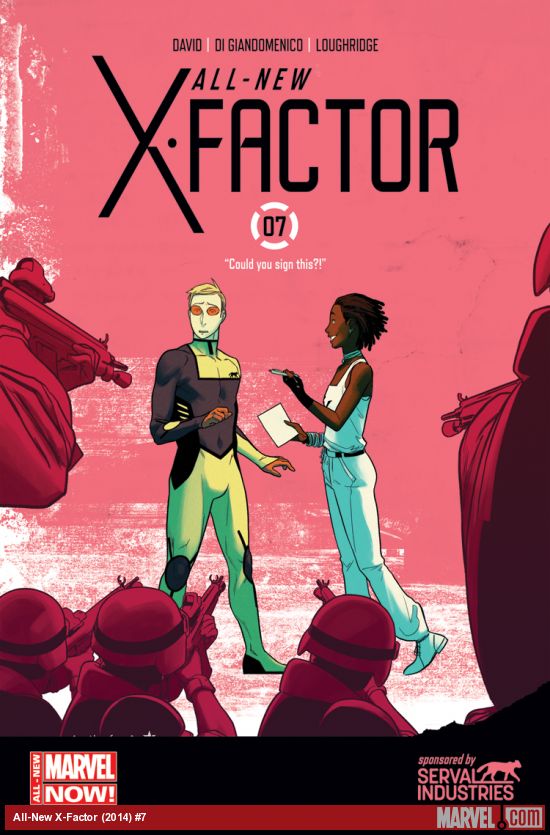 Can I just say I really like this book? More so than the last volume, even, as, although the characters bring their own sense of continuity, there’s a freshness to this cast. Perhaps it’s simply because the team dynamic is so utterly brilliant, especially between Warlock and Danger.

Did you notice the flowers? How damned cute was that? And not even a mention in the dialogue or captions. I wonder if that was David or Di Giandomenico?

Speaking of, he still doesn’t quite gel with me the way David does, unfortunately. While there’s no difficulty following the layouts now, Di Giandomenico seems intent on inserting extraneous lines into scenes, specifically faces. Seriously, a few characters looked as though they’d just crawled out of a car accident or toxic waste spill.

Story-wise, this was one of the better issues of late, though it seemed like it was still rather easy to see where the overall buildup was headed. Shit went down, things went south in a few dire ways, and it was all rather enjoyable to read. There was also that ending, which, unlike the bait-hangers we've been left with lately, has me extremely excited for the next issue and the next arc.

That said, Sorrentino and Maiolo remain the true draw for this series, and don't disappoint. There's a spread only a few pages in that had me simply staring, soaking in the baffling amount of detail. It's simply astonishing and, again, I don't understand how Sorrentino does it month after month. I'm not sure how great it would be without Maiolo in the mix, because he brings a ton to the table and uses the mix of reds and greens to great effect here to highlight some of the more astonishing moments. 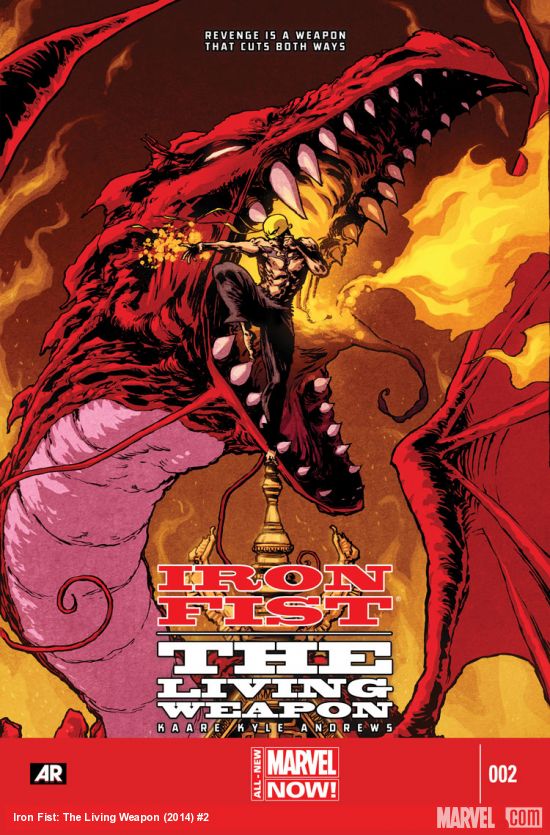 The rest of the book before that, while enjoyable to a degree, proved somewhat difficult to follow, and that’s for a fan of the Immortal Iron Fist series from a few years back. Some of the characters from that reappear here, though changed, without any indication of when or where that occurred (I must have missed something somewhere). Sadly, the recap page does not remedy this.

Past the story, the art is perhaps the true draw, and Andrews’ stylistic designs both hinder and help the series, offering beautiful, sweeping panels while others look overly crowded or unpolished.

After this issue, the book’s been added to my pull list. I hope it sticks around.

After last issue's fill-in artists, this fell to the bottom of my reading list. But, thankfully, Porter came back swinging and delivered a solid issue that, while certainly an interim step in the larger arc,  offered many well-developed character moments and continued to build on the entertaining story this series has held since the very start.

As with all plots set in a future, and just as I worry for the comic directly below this, this series seems to have no bearing on general continuity, thus making its only merit the quality of the comic itself rather than long-lasting effects. While I'm enjoying it, I fear people aren't in general, and that this book, after only six issues, is already on the out. I hope I'm wrong.

The mouthful of a name for this new weekly series is a good indication of just what you’ll find within: a whole lot of storyline to work around, and not all of it necessarily feeling quite right.

The Batman Beyond bit is, not surprisingly, the most interesting and it’s this the Free Comic Book Day no. 0 focuses upon (really, you need to have read that to have a basic understanding of where this book is headed). The other characters introduced in the first proper issue appear under a wall of exposition, which is expected in such a case, though the Grifter section seemed to have no bearing on the rest of the conflict.

Art duties shifted between the various contributors to the series in the prequel comic, then to only Zircher for the first issue. While you can spot some of the transitions between artists, none of them are jarring and Hi-Fi's color do a perfect job ensuring they mesh rather seamlessly. Kudos to the editorial team for choosing such similar artists to handle this near year-long series.

I am sad to report that I did not get my hands on an official Satellite Sam Tijuana Bible. While the (what I believed was low) threshold for ordering was only 10 copies, my local shop apparently orders and sells only about half of that. So, enjoy it, those who have it.

Even without that fun little bit, I think this series is in a firm uphill swing in quality, especially in regard to Fraction’s ongoing plots, which seem to only grow more mysterious and stranger with every issue though are nevertheless entirely engrossing.

I need to give Chaykin credit as well, as, though the dialogue clouds are still a bit problematic, he really knows his stuff. The textures alone offer more detail than most other comics have in their whole books. This issue even offered some of the best transitions I've seen and a few well-executed match cuts. 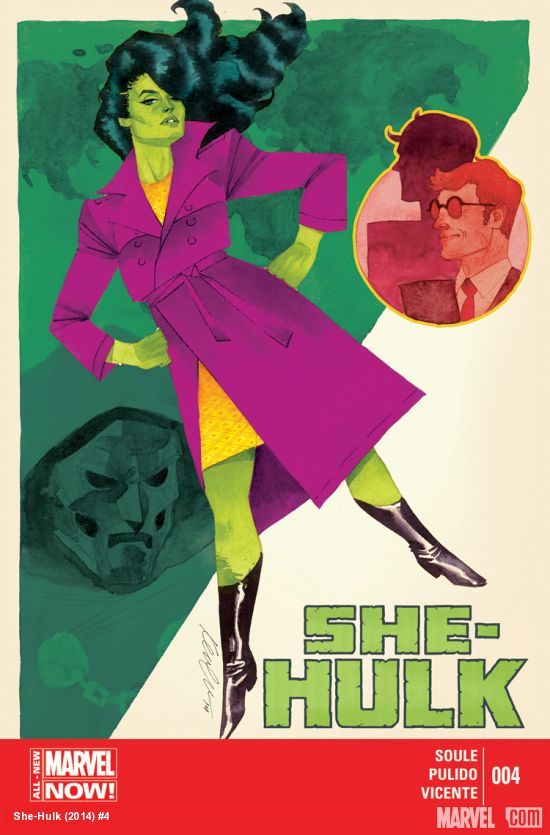 The fundamentals behind this issue are sound: She-Hulk looks to Daredevil for advice, then breaks into Latveria to confront Doom after last issue’s cliffhanger. Simple enough. So, why, oh why, was there so much exposition?

Perhaps I’m in the minority, but I read the recap pages for all the Marvel books I purchase (since, you know, they’re there). Reading this issue’s, and then the next page, was like déjà vu. The same could be said with the brief Daredevil cameo, though the tease for a potential crossover was certainly welcome. What makes it somewhat worse is that, once those are out of the way, the issue speeds its pace considerably, with a few pages of only sparse dialogue.

Those pages are highlighted by equally minimalist art from Pulido, with pop-art type coloring by Vicente that truly brings it to the forefront. I will say, though, that the She-Hulk jumping sections were fairly odd—the positions in each appearance seemed very unnatural, less like she was jumping and more like she was squatting in a bush.

Though I welcomed the fun of a potential She-Hulk/Daredevil crossover sometime in the future, the last page of this comic (the last I read before heading to bed, leaving a few more for today’s browsing), made me scream, “Mother fucking crossovers!”

I kid you not.

While no part of me is looking much forward to that abrupt storyline (though the reasoning behind it from before this arc had me tickling with joy), the conclusion of this “Gift of the Sureen” arc was another notch in Soule’s belt for enjoyable issues. Perhaps that was due to the reminder of The Last of Us within the pages (by far one of the best games ever created in modern times), but those 18 pages or so just overflowed with joyous developments. Really, that was as much due to Saiz and Pina as Soule, and I have a hard time wondering now where this book has been all my life. I may have been spoiled by the cliffhangers of the three previous issues, as I felt entirely underwhelmed coming out of this conclusion. Really, if I, or any other reader, desired, now would be a perfect dropping point to make this latest iteration of the classic character a self-contained storyline.

However, I won’t be doing that. There’s plenty in Pak’s script to love, and while my qualms with Colak’s portrayal of the action continue well into this issue, clouding certain scenes and forcing readers to fill in quite a few blanks much like the original Son of Stone series (and not at all like more modern-day comic series), I note the next issue’s (or the next arc’s?) art duties will be handled by someone different.

Though only time will tell, I’m hopeful the narrative will only become clearer while Affe continues forward to provide a sense of continuity.

Murphy really lays out some gorgeous imagery this issue—the kind avid collector’s would throw money at to hang on their walls. Unfortunately, while nice and harkening back to The League of Extraordinary Gentlemen (the comic, of course) in certain ways, these same pieces also distract from the story at hand.

Certain details are lost, or altogether unmatched to the dialogue and narrative, while a few panels simply made it impossible to follow, forcing readers to play catch-up a few boxes later. As an interim issue, though, that dialogue and narrative was really strong, showing a vastly different edge to the conflict.

And, man, do I want some of that Mer juice.