Took me awhile to decide how I felt about the comics this week. Nothing against any of them in particular, but I... I don't know. I guess I just wasn't feeling most of them at first. Yet, after sitting on them, I really, really liked quite a few.

Someone should teach a “Physics of the Comic Universe” class to explain the sheer luck of characters in books like Green Arrow. How one master archer could miss so flagrantly after making such a bold statement while another lands a deathblow completely by chance is beyond me.

But such is the world of comic books. Specifically, super-hero comics. Just compare this to the surprising journey of Lemire’s Trillium, which was anything but predictable. It’s incredible. So, while this issue was certainly enjoyable, the tell-tale nature of its storyline (and the reliance on “surprising” cliffhangers) has worn a tad thin.

What remains a draw, though, is Sorrentino’s art. Here, he channels some of what made I, Vampire a necessary pull, with a horde of warriors tackling one another in glorious detail—and then goes well beyond even that. There were multiple uses of the 3D arrowhead effect, but that’s alright. It’s enjoyable enough to appear more than once. And, as always, Marcelo Maiolo’s addition to the art team cannot be undersold, as the blend of different color themes really drives Sorrentino’s art to full effect.

After a modest dip in quality, Soule returns with an improved third outing, with a unique, interesting plot I couldn’t see much anywhere else that moved at a breakneck speed and promised great things to come. Coupled with the near-flawless art, which jumbled only on a few of the more complex layouts, this made for a special treat among the week’s other books.

However, I’m terribly confused now. I haven’t followed the character much, if at all, beyond a few random issues, appearances and the recently completed second volume of FF. In all those, I haven’t once seen her shift into human form as her cousin Bruce (Hulk) does so frequently. So, can she do that all the time? If so, why doesn’t she simply appear as Jennifer Walters on a day-to-day basis? Wouldn't that make her job as a lawyer that much easier?

One more thing (and pardon me if this sounds asinine, but it really did confuse me as a general reader, and that’s always worth pointing out): how old can Kristoff truly be? In last week’s Silver Surfer, it was noted that his arrival on Earth occurred 12 years ago. That happened relatively early in Fantastic Four history, so Kristoff couldn’t be more than… what? Fourteen? Fifteen? Yet he read much older, perhaps in his twenties. Perhaps that’s just the character, but a finite point on that would have helped, even if was nothing more than a throwaway line.

Okay, enough of a rant. This was a fun issue and if you haven’t read it, you really should.

This issue worked as a really fun and intriguing way to reintroduce us to what seems to be a known, but recently absent, threat, and for that, it will remain memorable for some time. But, other than that cliffhanger reveal, this was a fairly mediocre interim for the three-issue “Gift of the Sureen” arc.

There is overwhelming promise of potential storylines to come, but outside the brief cameo (which appears to carry over into another series I don’t purchase), nothing paid off here. The former avatars continue to make their moves, stalling momentarily, those behind Swamp Thing’s transition are performing tests and an old man is reading books.That's pretty much the gist of it.

Saiz's art and layouts coupled with Pina's finishes were as standard as the plot’s movement, and while that may sound like a knock against them, it most definitely isn’t; the artists effectively convey the story but simply offer nothing stellar or breathtaking.

While I’ve given a few other comics flack recently for not being clear with the direction or plot, Trillium’s subjective, offbeat ending works perfectly well as a conclusion to the mind (and page) bending series.

What truly elevated it here was the art, as the first two-thirds or so are presented very traditionally, with a layout reminiscent of such works as Watchmen—solid line-work mostly unseen in previous issues—and then switched suddenly to a boggling display of love and affection. The story flowed similarly, and blended quite well.

Now that the series is done, I will say I believe it would have worked far better, and probably should have been released, as a bound graphic novel like Lemire’s previous Underwater Welder. I’m certain it will read more coherently in one sitting than it has over the last year or so, and I’m definitely going to personally find out. 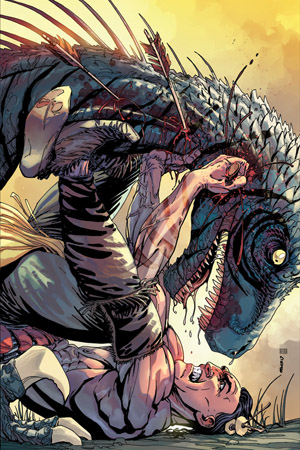 From a slow and touching, yet incredibly in-character beginning over a funeral pyre to a vicious mid-jungle showdown atop horse-like dinosaurs, Turok, Dinosaur Hunter continues to showcase Pak’s abilities to reimagine the classic character for a more modern audience.

The art isn’t as strong as the writing, unfortunately, with some varying character designs throughout, most notably in regard to the titular character, though it still works to perfectly convey the tone and scale of the storyline. There was one point of confusion, though, and I’m not certain if this was a lapse in the art or the script, but how were those “carriages” being moved with all the men within their…

Okay, that’s rather brilliant, isn’t it?