I’m not sure whether I should be happy or aggravated that DC re-released Detective Comics no. 27 for “Batman Day” now. Sure, I got what basically amounts to a free $7.99 (how insane is that price?) comic, but after reading the short story there and this sort-of prequel, I’m left feeling bewildered at how much thought and effort has gone into a future for Batman we’ll simply never see.

Not that I particularly mind, that is. Seeing Bruce knocking on death’s door as he is here, practically incapable of holding himself together without outside help, as well as Alfred’s frail and cancer-ridden appearance, I worry about the grim and daunting nature of the stories that would otherwise be between. I know DC has made a point of late to be far more serious than Marvel (particularly on the film side), but that may have pushed it over the brink if published.

What hurt this issue, and why I’ve given it the score below, was Aco’s art. Frenetically chaotic during every action scene (meaning a good half of the pages), the finer details were lost and the story itself, especially the break-in, difficult to follow. Plascencia perhaps could have done more to differentiate the fore and backgrounds with the colors, but, alas, no such luck.

No offense to Aco, who I'm sure could rock certain comics, but, damn, how I wish Greg Cappullo could draw every issue of Batman. 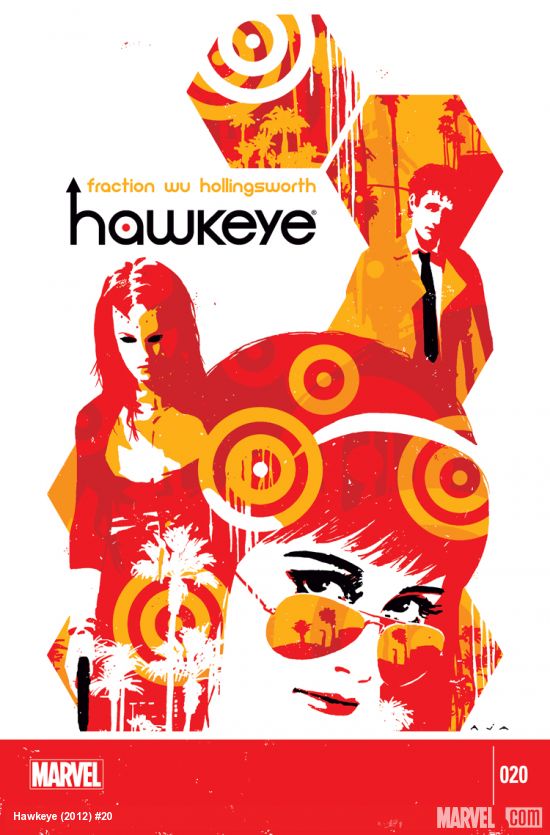 While it’s great to have this series (which has maintained a hold within my top five titles for some time now) back and running full speed ahead toward its climax, I think Hawkeye might have lost something during the break.

Sure, the time jumps panel-to-panel have been and continue to be Hawkeye’s bread and butter, giving the book its necessary Fraction pizazz, but where these should have read as fun and exciting, they left this particular story feeling oddly anticlimactic. This feeling may have been due to the blasé narration more than anything else, as, outside the beginning and end, a sense of energy and urgency was never palpable.

Wu’s art was extremely sharp, though, with more detail crammed into each panel than I remember in any of her previous issues. While I appreciated the effort, it also seemed to distance itself further from Aja’s work (as well as Wu's own work on the title), which brings me to my final point: will he be the one to finish her storyline in the coming months?

Will we even get a proper ending for it? I wasn’t a fan of the Prometheus film. It had too many logic problems within its characters and its storyline to ever possibly be considered anything besides eye candy. On the other hand, I’ve found something enjoyable, thus far, in every Alien and Predator film released.

Prometheus: Fire and Stone is, thankfully, more like the latter.

Really, it’s a blend of the film’s opening minutes and Aliens’ character building—though we get far too many of those tossed our way this issue to think most, if not all, will simply not make it through much past the next. The only real add-on to those films (and truly the only new ground to be broken for those who haven’t read the older comics) is the variety of fauna. Alien ants made my day (and made me wish there was a farm somewhere nearby).

The art was more painterly than I would have wished or expected, but it was fitting for the book’s atmosphere, and the last page’s visuals, albeit not designed in any way that could be considered surprising, left me hopeful for the next issue, while I remain very interested to see how this event carries over to the other series, and what the Fire and Stone part means.

But, first, who do you think will die first?