I know they're a day late and more than a few dollars short, but I opted to post these today rather than simply taking a buy week as I originally considered. After all, it's not every week your first-born son comes into the world, and while it's been a fun period of adjustment, life (and work) must inevitably go on.

Plus, there were some damned good comics this week. And they need their due.

One more thing; I want to extend special thanks to Kaare Andrews, without whom there wouldn’t be an Iron Fist review below, as every issue of the book at my LCS came in damaged.

Three things about this issue: it reminded me of the infamous episode of Seinfeld, “The Betrayal,” which is, of course, a great thing; FART; and this is the one that finally convinced me to add this series to my pull list.

There’s a lot going on here, much of which benefits from a second reading—whether in the order presented or in reverse, either of which will present a much different understanding of the storyline, particularly the first page. The issue is incredibly well-written by King (with Seeley also helping along with the plot), and it’s likely the nuances may be lost on some, but if so, do yourself a favor and give it another read.

The strength of the writing is somewhat dulled by the art, which comes off at times rushed or lacking forethought. One page in particular’s general rebuttal of wind physics bugged me more than perhaps it should have, while anatomy issues plagued a few others. Overall, though, the issue was well laid out, with some fun experimental imagery and near-perfect execution delivering done-in-one stories every page.

Unlike the other "Future’s End" books I read this week, Green Arrow truly feels like an issue of The New 52: Future’s End rather than the series from which it borrows the creative forces of Lemire and Sorrentino.

That’s not a bad thing in and of itself, truly; however, this doesn’t read so much as a conclusion of the duo’s run (see last issue for that), but rather a launch pad for Lemire’s work in the weekly. If that series had been as great (or even close to as great) as this had been, that would certainly be a wonderful thing. But, you know, I dropped that lethargic series for a reason, and I’ve yet to see any reason (outside the strength of this tie-in) to regret that decision.

Maiolo overdoes his work on the issue slightly, the color shifts once or twice taking away from the art rather than adding to it. Perhaps he simply wanted to go out with a bang, and, seriously, who can blame him? Along with Sorrentino, who delivers once again (and whose next project I’m anxious to discover), the art team has nailed a beautifully-handled take on Green Arrow—a character I’d never cared for but suddenly wish to never part with.

As the ending of the first collection (and the last issue before a temporary series hiatus), this issue doesn't so much serve as a conclusion to the arc as it does another step in the story's direction, with the characters maneuvered like bloodied chess piece across an increasingly complicated board.

In the age of "writing for the trade," this sort of structure stands out from the pack, even among many of the more formidable indie titles, which, albeit somewhat open-ended and written for the story itself, still exist in fairly definable arcs. However, on the same token, it almost appears as if the issue was meant as a conclusion, with the final few panels in particular noting a new direction (and reminiscent of a recent Green Arrow cliffhanger).

If that is the case, it doesn't work as intended; however, I tend to think that, given the subtlety of the writing thus far, especially as it concerns the female protagonist's background and the mysteries surrounding Danny's origins, nothing here is anything less than fully calculated. And it's wonderful.

One last note. How damned cute was that dragon?! Gork! Makes me almost not mind seeing its previous version beheaded and.... 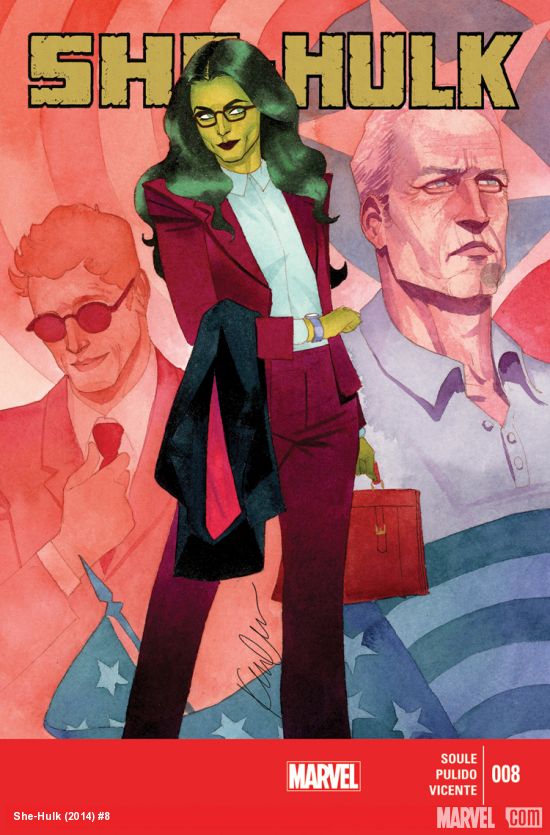 Either those in charge of Marvel’s monthly solicitations need to rethink their strategies, or I simply need to start avoiding them and their coverage altogether.

Because, though it was partially nodded toward within the issue itself, recent She-Hulk solicits completely ruined this issue’s otherwise exciting cliffhanger. Which is a real shame, as it seems, at least to me, this is the story Soule’s been just dying to write. Not only does it call on his seemingly endless grasp of Marvel history (including a uniquely simple explanation for one character’s appearance), but builds on his own experience as a lawyer—the same experience that has given this series such a different vibe compared to other current comics.

I mean, he’s not just writing about being something. He is that something. That’d be like me being an albino mass murderer with a penchant for cutlery. It’s just cool.

Pulido’s pencils are simple and clean, as are Vicente’s colors, and while there’s never anything that seems to go POP this issue, it’s still a treat for the eyes. Kind of like a bowl of vanilla ice cream—nothing overly complex or thrilling, but perfectly hitting exactly the right cravings.

Could we not come up with new colors? Green, Red, Black and Gray are so clean and generalized as to warrant a primitive, innate fear. Yet these new ones, these Metal and Divided—why aren’t they Silver and Purple or something like that? Surely there’s an abundance of applicable colors?

That bears no comment on the comic itself, which serves as an extremely fitting conclusion to Soule’s Swamp Thing run. You know, if it were actually coming to an end. It brings many questions, many answers, and a justifiable means to an end alongside a different sort of characterization than we’ve seen before that imbues Swampy with the sense of Godliness oft forgotten in the face of other superheroes.

All of this is beautifully drawn by Saiz, though Wilson’s accents on the pencils are what truly drive the imagery, particularly toward the book’s end. That said, Saiz instills an abundance of detail into every panel, and tackles the medium-to-long shots with a certain grace I’ve seen others completely miss.

If you missed the announcement, unfortunately this is the start of the end of Soule’s run. Whether or not it runs to March, when, according to him, his DC work ends outright, or before, it’ll be a shame not to have this fantastic book at hand every month. Turok’s in a rough place. Despite how far he’s come since the series’ debut, the character’s yet to really catch a break. You’d think a cute Skyrider asking him to run away with her would be a good thing, but no, he doesn’t get the mega-happy ending. He gets the literal shaft instead.

Well, at least his friend does.

And that’s one of the reasons I adore this series so. Unlike the original Son of Stone, or even some of the first run of Dinosaur Hunter, this Turok doesn’t always win. He doesn’t always have the answers. He’s just a kid who happened to have a slight turn in his luck. Pak’s handling of this version is simply phenomenal, and so utterly different while respecting the general concept that anyone could (and should) jump aboard this series with ease.

Miyazawa’s work helps as well, offering imagery closer to manga than anything offered by traditional American publishers. The stark contrast to just the opening arc keeps the book fresh and exciting. But really, is that needed? There’s a friggin’ dinosaur with a Nick Fury eye patch eating squirrels. That’s nothing but win. The dry, documentary-style captioning Gillen employs for Uber works quite well at times to infuse a sense of reality into the otherwise fanciful world of this World War II redesign. Other times, though, they’re complete misses.

Such was the case here.

It’s not so much the captions take away from the comic. Rather, they simply fail to add anything memorable to the issue and take attention away to the otherwise simple storytelling of Gete’s layouts (which Gillen addresses in the backmatter). They also fly in the face of the first two tankmen with personalities, whose humorous banter in light of the grotesque mayhem inherent to the mission at hand comes off very refreshing in the otherwise generally stoic series.

As I’m writing this, I’m suddenly wondering if Gillen’s treatment of the historical captions would work in a book form. Those nonfiction titles that stick with me the most (such as Roger Crowley’s 1453) were written in such a way as to almost prove a fictionally similar event could never concoct such wondrous perspectives and events. Uber being the antithesis, would it stay the course?

I suppose reading about a man whose battered flesh was so powerful only a drill could effectively euthanize him would stick with me. Ouch.