Typing this makes me realize I think several parts of my skin were exposed to poison ivy oil today. Very excited about that....

I've got mixed feelings about this issue. I mean, it's not a bad interim between main arcs, it was nice to have some background for Anderson and doubly nice to have Sudzuka back on the title, but the storyline is still not up to the same high quality of the first five issues.

It's the atmosphere that's lacking I think, as this still comes off as disjointed and convenient in its many turns and twists. Fortunately, though, and what gives me even the tiniest bit of hope, the last few pages are the strongest in some time and a welcome return to greatness. If those are a hint of what's to come in this next arc, I'll be along for the full ride, but if they're only a fluke, well... we'll see.

Just want to say, why caption something saying it's the Trans-Siberian Railway when that same description is built directly into the art?

Anyway, I was a bit lost going into this series, as I'd never read a Nightwing solo book, had never heard of Spyral (wasn't that an X-Men villain?) and have no idea who any of the supporting cast are. I honestly expected this to be a bit more reader-friendly than it was, but hopefully that "deep end first" feeling will fade soon.

And what was up with that faux-Batman? Was that an in-joke of some sort? Sure, he was cool in his own way (and had a few of the issue's best lines), but it was as though the writers felt Dick couldn't get along without Bruce at his side. He was even designed similarly.

It sounds like I'm picking on Grayson a bit, but honestly, I really enjoyed it. Janin's work on the book was fun and energetic, Seeley and King obviously have a great handle on the character, and it's carefully balancing the humor of Harley Quinn with the grim action of Batman. I hope that feeling continues into next month.

This issue marks Part 4 of 5 of the comic's first arc, "Justice League Canada." That means there's one issue left.

Chances are, it'll be my last of this series.

There's just a general simplicity to Justice League United that doesn't work for me, though I'm certain it appeals to some of the older comic readers--those who pine for the Golden and Silver Age books. To me, that kind of storytelling simply defies logic. For instance, the series is following a collective of species capable of gene manipulation on a massive scale and yet they're incapable of deactivating or securing the equivalent of a nuclear meltdown. Priorities, people.

It's not just the writing. The art is equally stiff and unemotional, as though the characters are posing and waiting for a cameraman to take his picture. Honestly, it reminds me of Greg Land's art, with a touch of Bryan Hitch. So, you know, maybe that's for you. But it's certainly not for me. 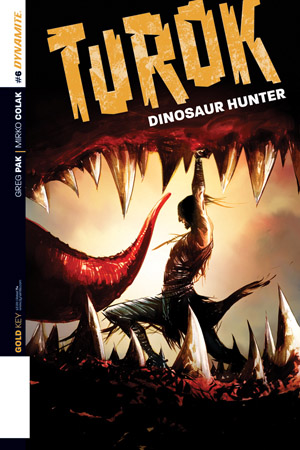 This book went by far too quickly. I even counted the pages when I'd finished, thinking it was shorter than it should be. It wasn't, of course, and I realized the speed with which I roared through the book was due to Miyazawa's open, expressive panels bringing overwhelming life to every page.

Though Pak's slim script doesn't offer much by way of exploration or even dialogue, that's perfectly fine, because the issue was nonetheless fun and entertaining. It's actually nice reading something that comes off as natural and not simply befuddled with myriad panels of talking heads. The narrative split near the end wasn't as eloquent, however, as Pak and Miyazawa likely meant it to be. It reminded me of Trillium (without the comic flipping), and while the overall effect was lackluster, the final page was nothing short of spectacular.