How about that for a Star Wars tie-in, eh? Talk about search engine optimization.

My fonts and font sizes decidedly behind me, I got to work on properly formatting the book in its entirety. And when I say “entirety,” what I really mean is the “body.” And when I say the “body,” what I really mean is the first page of every chapter. Because, when you really stop and think about it, that’s really where all the formatting takes place.

There’re a few key questions to face here right off the bat. How far down the page do I want to start each chapter? And how do I want to visually differentiate the start of each chapter? What about the headers and footers, what’s in them and what should they look like?

Let’s tackle the first one. See, maybe you’d never even considered it before, but there’s a delicate balance you’ve got to maintain when it comes to where a chapter starts: too high up the page and there’s not enough visual break between sections; too low and readers may think (and they’ll probably be thinking right) you’re artificially padding the page count.

There’s probably a dozen ways to format this in Word, from automatic to manual to some lovechild of the two, but the easiest (and, typically, most consistent) is simply to smack the Enter key however many times you want before the chapter heading. For The Nobodies, I did it six times, bringing me about a quarter of the way down the margins. I could’ve put some in after the chapter heading, too, like I did for Sanity’s Flaw, but it just didn’t look right. The way I formatted them kept them nice and snug right on top of the text. 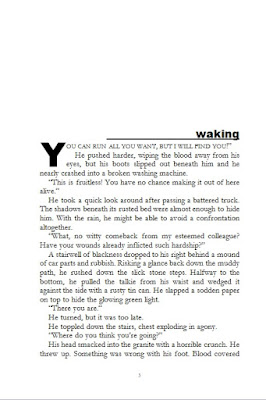 Not one to break a design when I find it oh so sensually appealing (that’s right), I went back and added the same padding to the title pages and a few other areas. Consistency is always key.

In Sanity’s Flaw, I made chapter breaks and starts pretty simple to further the “theme” that it’d been written and put together by the narrator rather than any professional artist or publisher or designer or whatever (not that I’m any of those, really).

For The Nobodies, though, I wanted something a bit fancier.

Which brings us to the drop caps. I’d tried them before, mind you, though they were inevitably scrapped. Thing is, I’ve learned a ton since then, and this time they were easy as pie. I went with the Arial Black to work as something of a bridge between the body and headings, and Word’s standard three line drop.

For the most part, they worked perfectly, no extra fuss needed. There were a couple, though (particularly A, H, I, M, O, R and S) that looked a little off, though. In short, they were either too far from the first line or too close to the second or third ones. The fix? I increased or decreased the padding around these as I saw fit. I don’t think there’s any hard or fast rule around doing that, though, and, given its basically to personal taste, can’t necessarily recommend a guideline.

Drop caps looking positively ravishing, formatting the first three words of each chapter to just small caps seemed… mundane. Ugly. I tried it, though. Problem is, it gave me something of a problem in a few sections that had only four or five words at the start. Like this:

THIS IS A fun thing.

Doesn’t that look weird? Well, I thought so.

I didn’t have a definite answer, though, and it wasn’t until I read Dreiser’s The Genius that I stumbled on one: use small caps across the entire first row. Done.

That right there, plus setting paragraphs to a 0.2” first line indent because that’s just the right pot of porridge to note the line breaks, was the bulk of the book.

But it wasn’t everything. Because I’d forgotten the section heads. Those’re basically as important as a chapter head, and they had to look right. And that’s when things got weird. 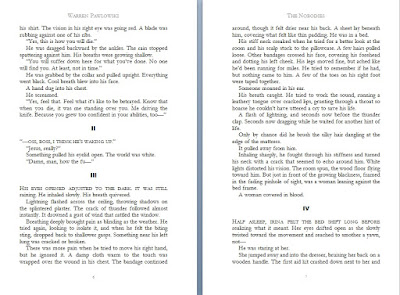 The first line was the same as the first line of the chapter at large, just without a drop cap. That wasn’t the issue. What was were the roman numeral headings themselves. The Garamond I used in the body just didn’t work. Didn’t make sense, either. I had to use the Arial Black. But to make it the same size as the chapter titles took away from those and made the section breaks just a little too prominent. Instead, I dropped the section headings to 12 pt, which was awfully close to the 13 pt Garamond. Except, not close enough.

That didn’t happen on any page with a section break, though. Inserting those, formatting those, it threw everything off. The fix for this part? Increase the padding on the lines before and after the roman numerals (writing this now, I’ve no idea why I didn’t just increase the padding of the one line—not sure how I missed that). Tweaking them up so each line was 13.5 pt did the trick.

We on the last question now? I think so. Headers and footers.

I debated making them Arial Black just for shiggles and consistency. But, doing that totally pulled attention from the body. So I used the Garamond, keeping the 13 pt and small caps in the headers (name and title for those). I stuck the page numbers in at the bottom, center footer, but went with 8 pt Garamond. Really, I saw no reason they need to be any bigger than that.

That’s it, right? Well… no. I know, this is getting long now.

There was one more thing that needed fixing. Remember when I said facing pages need to align? Well, the absolute most important part of that rule is the last line of every page. Now, that’s not to say every page should end at the same point, just that the two facing pages should.

Keep in mind, though: You have one line of wiggle room. You lose any more than that, and your book’s going to look wrong. Freakish. Unprofessional.

How do you do it, you might ask. What does that entail? Well, really, editing. Because, and I’m going to dip into formatting 101 here for a second, we also don’t want to shove any widows or orphans into our book, either. Which makes the only way to ensure consistent ends actually adjusting the writing—that is, add a line here, take a line there.

Sometimes, all that takes is adding or changing a single word in a single paragraph teetering perilously close to the right margin. Other times, more. I ended up adding or cutting whole lines, or even rewriting paragraphs to be more or less descriptive. Thanks in part to the writing style of this book, though, I didn’t have to make all that many changes, really. It just took a hot second.

And that was it. It was done. Well, basically. I could go into where page numbers begin or the use of blank pages, but I just don't feel like it. Because I've written a lot. Really, it seems like I did a lot now I’ve written it out. And it did take a little awhile, truth be told. But it was fairly self-explanatory. Instinctual. And, wrapping that up, that meant all that was left for the interior were the pictures. And that’s a story for another day.
Labels: design editing layout self-publishing Star Wars technique The Nobodies title Updates