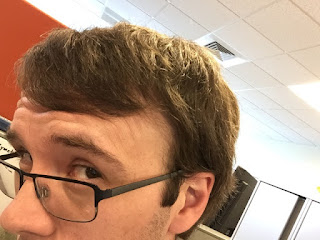 I haven’t cut my hair, other than a few maintenance shaves, since late last year or so. It’s the longest now that it’s been since I sported black hair in college and it’s really starting to bug me. I honestly don’t know how people keep hair this length at all times. If I could, I’d cut it right this moment; unfortunately, I have to wait for a particular meteorological event to occur before I can do so.

I need it to rain.

What makes it worse is that I need it to rain at a specific time. Night, to be exact. While it’s been raining here fairly nonstop for close to a week, it’s really only done so during the day. Only twice, around 2 or 3 a.m., did I have any semblance of a chance to take advantage of the dark, but it’s hard to wake a sleeping Warren. So, here I wait. With my long, unkempt, camera-ready hair.

Thankfully, while I’m waiting, I’m also getting other things done.

Work on streamlining The Nobodies is almost complete and a new proof should be on the cards within a week or two, after I give it a new read-through. I’ve asked my lovely assistant (that is, of course, my wife) to do the same for the print copy, as she had some of the most thorough comments I’ve yet seen surrounding the story, and then we’ll be good to go. I’m shooting for a June launch, but a July release isn’t entirely off the table.

I’ve also started work on a new short story. Stemming from some recent, personal events, to date it’s only at the most basic skeletal level, but I presume, if it’s self-published as A Conversation was, that it will be released in late 2016 or early 2017 as something of a publishing bridge between The Nobodies and Trezka.

I’ve written another, shorter piece (a work of flash fiction, actually), but that will be sitting in my pocket for now. Given its length, I think it would make more sense for it to be released in an anthology or similar publication, and will be on the lookout for opportunities to do so. If you see any, please feel free to send them my way.

On a slightly unrelated note, would anyone like a sticker with a serial killer’s quote on it? Asking for a friend.
Labels: marketing short story The Nobodies Updates