Talking More of ‘A Conversation’ 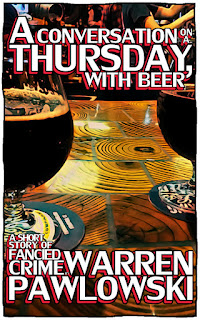 You may have noticed I published a short story last week.

(Or maybe you didn’t and need to go back and check that out.)

I’d hinted at it coming, talked about it awhile back when I submitted a far earlier (and surprisingly different) version for a national contest, but it still kind of came out of nowhere, didn’t it? Well, that was by design. I wanted to catch you off-guard, come at you and be like boo! Err… book. Err… short story. Whatever.

But, now that the launch is behind us, let’s take a more detailed look at it.

Here’s the current description for “A Conversation on a Thursday, with Beer” up on Amazon:

Two friends debating—on a Thursday, over beer—how to steal comics.
Though this will soon be replaced with a more extensive description, the story really is as simple in premise as that, and derives from similar talks a friend (the same one to whom the story is dedicated) and I would often have when left to our own devices and a few pints of beer. Sure, the conversation between Bennett and Khai gets a bit more elaborate and detailed compared to anything we probably would have said in real life, and it moves along without the constant interruptions such talks usually have nowadays, but that’s literary style for you.

The tale opens with Bennett talking about a particular comic book in a particular place, how he regrets not buying it. And that’s the truest part of the entire story: that place, that comic, that price are all straight out of my childhood memory, when I could go to any flea market or antique store anywhere and buy copies of books from the seventies and earlier for mostly a dollar or less. With the rising popularity of comic book movies and increased speculation, those same books today go for upwards of hundreds or more. If I’d had the money then, I would’ve bought more. But I was just a kid, and as a kid, I figured those kind of offers would be around for some time. Little did we know, huh?

If you read the original version, there’re plenty of changes you might notice here. The dialogue has been refreshed, clarified and extended, and some of the “sub-plots” are more defined. The biggest difference, though, comes in the ending. The last three pages were completely redrafted, reconsidered and rewritten. The last line alone went through about ten different versions until I found the exact verbiage to convey both the success and unease of the final decision. And the despair at what, exactly, it meant for both the preceding storyline and the greater impact to the character.

You can probably see why it went through so many revisions.

There’s one final note on this story I’d like to share today: though it’s never said, I pictured it entirely set at Two Roads Brewing. The base cover image was even taken there on one of my visits. If you haven’t been, you need to. It’s delicious and the staff are some of the nicest around. You can even bring your own food.

And if you haven’t read “A Conversation on a Thursday, with Beer” yet, I hope some of the above tickled your fancy. Plus, if you’ve got a Kindle or kindle|unlimited, you can probably even read it for free.

I hope you enjoy it reading it—because I know I enjoyed writing it. And if you do, or even if you don’t, please be sure to leave a review and let other people know. Because reviews are awesome. Even when they’re not.
Labels: A Conversation self-publishing Setting short story Updates