I've had issues with the art in the past, but the latest issues have been rather good. That stops here, as the panels are far too confined, too crowded, and make the action extremely hard to follow. None of the character models are ill-defined (as was the problem before), but the art simply didn't serve the story.

The story, albeit relatively simple and generic, was good. At times, it proved a tad bit expository and slow, but the culmination of a few separate plot threads kept it alive. I feel it is worth noting, though, that this team doesn't seem to hold the same weight as that of the previous volume. There is some levity in the form of Warlock and Doug, but the cohesiveness found in previous volumes is not there yet. Hopefully, that makes it mark soon.

Unfortunately, news broke yesterday that Lemire and Sorrentino will be ending their run in September. I've never read Green Arrow before this, only coming aboard the book because of Sorrentino's beautiful work, and I doubt I'll read it beyond September, but these last fifteen issues or so have been quite great (aside from the insane overuse of names on every page--something I've grown to realize is a Lemire staple).

This issue continues the same pattern, with an explicitly harsh ending. Knowing Lemire, at least one will be a cop-out, but the desired effect was there nonetheless. The same could be said of the addition of Emiko, who could very well have her own series if she's allowed to grow and develop beyond a simple Robin to Green Arrow's Batman.

I must say, I will follow Sorrentino wherever he goes. Hopefully, he'll continue to be paired with Maiolo, as the two work exquisitely, and I'm certain the effect would be diminished were one or the other not along for the ride (see Justice League United). I wonder, now, just how much of a hand Maiolo has had in the extravagant art? 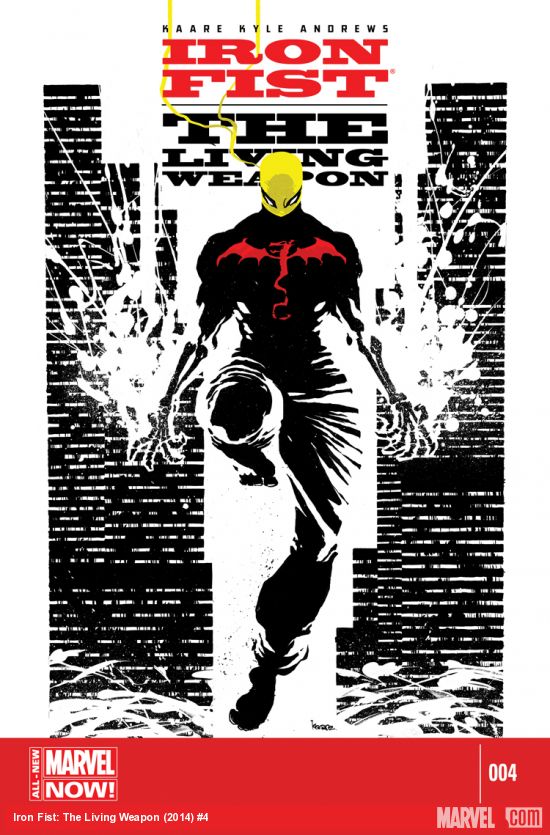 This may be the best written issue of the series thus far.

I know, I know, there's only been four, but the first half of this book is something you rarely see: a thorough, intricate representation of that moment a relationship totters over the edge, when sexual chemistry becomes romance. It was all very playful, very fun and very real--something I'd expect in a book like Saga rather than Iron Fist.

I also finally realized this issue why I've had some troubles with the art: the coloring. There were a couple panels, particularly among the action scenes, where I had to stop and wait for it to translate. This is especially the case in the bottom half of page 12, which looks mostly like a lump of random sketchiness until you focus on the right-hand side. It's the lack of contrast between the characters and the background, I believe, that muddies it, and while I now know the trick, I'm hopeful Andrews defines this more going forward.

In case you wondered:

So there was that. And, you know... some books, they give you no recap. They expect you to know the story, to know the characters, to have a general sense, as a reader, what's happening in this comic you're picking up every month.

Justice League 3000 is not that book.

Justice League 3000 expects that you've forgotten everything that's happened the last several issues or that you're a new reader. Justice League 3000 wants to ensure, repeatedly, that you know which character is meant to be which, that these characters are different from the characters you've known and love for years on end, that these characters are in this world only through the sacrifice of others. If you don't know that, you will know it by the end of this issue. Because, the writers don't tell you just once. Nor even twice. Why, they hammer it into you page after page after page.

You know, there's this thing called a recap page. Marvel uses it admirably. Even some Image books have them. I think, were it used here, this book would be half its length.

Satellite Sam no. 9 by Matt Fraction and Howard Chaykin

While this series started off with a rather simple premise, its quickly becoming clear its characters are some of the most nuanced and dynamic in all of comics.

Seriously, no one's more surprised than me.

It's not nearly the best comic I've ever read, but I keep coming back month-in and month-out because Fraction nails every. single. beat.

Chaykin almost has it easy this month, as the plot is fairly straightforward and doesn't require much outlandishness (though he seems to be defined by such). That said, I noticed this issue the lack of color is certainly no longer a problem for the book, and the touching scene of the one character on his death bed was incredibly defined.

I wonder... would the addition of color to the pages have actually hurt one of the chief developments explored this issue?

There's a lot to love in this issue: a character-defining moment for Alec built up to a climactic surprise; a welcome tease for the future development of Lady Weeds; and incredible setup for future issues. While most of this works, it's not juggled perfectly, and comes off a bit over-expository, particularly in the first half.

The story unfortunately keeps Pina from showing off his skills too much, though there is a rather gorgeous spread halfway through the issue. Credit should be especially given to Travis Lanham, who tackled those pages in a way I never grew confused. Well done, sir. While I think Gete is a phenomenal artist and a welcome addition to the art team, I must admit, I miss Canaan White and his kinetic energy, which suited this series so perfectly. So, I checked with Gillen:


@WarrenPawlowski It's going to be an alternating arc sort of set up from now on, basically.
— Kieron Gillen (@kierongillen) July 3, 2014


@kierongillen I like it. I'll definitely be along for the ride
— Warren Pawlowski (@WarrenPawlowski) July 3, 2014

I really am. Gete and White have such complementary styles, it'll be a treat to see their takes every arc going forward.

The developments this issue are sound, and while I'd venture to say it's getting to be a bit much, it seems fairly accurate. After all, this is research and development during wartime--a time when most nations seem to be at their most creative. So, of course this would happen, and I'm certain even more will happen going forward.