Given I announced it was coming last April (and offered a few copies free to those who donated toward Extra Life), it’s safe to say a print version of Sanity’s Flaw is a long time coming. But I can tell you now, it’s not for lack of trying. For an author like me just starting out and doing my best to keep costs manageably low, there was a lot to learn and a lot to do—and not all of it was quick.

I put my all into the eBook version of Sanity’s Flaw. It was never meant to be a lesser version of a future print version; I never believed there would be a print version. So when I published it in 2011, to me, it was the definitive version. Sure, there were a couple typos I missed in editing that I later fixed, but that was all there ever was going to be.

After tossing around the idea of a print version for several months and finally taking the plunge, I took it as an opportunity to put my best foot forward. I didn’t want the book to simply be a blind copy and paste of what was online; I needed to ensure, again, that I put my all into it.

So I did. I re-read Sanity’s Flaw for what must have been the thirtieth time, adjusting formatting on some words (like using hell rather than Hell) and correcting some capitalization and any perceived errors that could only be caught by not simultaneously pausing for edits—of which I found two.

Publishing an eBook and publishing a print book are similar in many ways, but they’re also incredibly different. One of the most notable of those differences is the interior formatting. While eBooks can change in appearance platform to platform, a print version will forever be precisely how I imagined it to be. As such, I wanted Sanity’s Flaw to not only read well, but to look great along the way.

To do this, I made a number of adjustments. I consolidated the number of fonts, eliminating one altogether and restricting another to ease transitions; changed chapter openings from All Caps (as required in eBook formatting) to a single full cap followed by a few “small” cap words; and thankfully activated the “Widow/Orphan Control” option not applicable to the ever-flowing eBooks. These were all only slight changes, but made for a huge visual difference in the final product.

The majority of time it’s taken to push copies of Sanity’s Flaw out the door has been dedicated to the new or revised visuals.

The cover itself was much of this, as, though I had a version I felt fully satisfied with for the eBook, that imagery seemed too bland for a shelf life. After finally accepting that fact, not only did I revise the cover image (lightboxing the original for consistency), I also applied new colors, shading and gradients. The new logo, while the same color, was modified from the general shape of the original and better ties the theme together, with the inclusion of a touch of red in the cover image only adding to the effect.

(Side note: It was at this exact point that I opted to make Sanity’s Flaw, The Nobodies and Trezka a bonafide trilogy. I had considered it while writing the latter, had settled on the name months earlier, but only here committed to “The Procyk Forfeit.”)

While all I needed for the eBook was a cover, the print version also requires a spine and a back cover. I hadn’t ever considered these, so delved into my library to find something I liked. What I noticed was that many books simply used a manipulated form of the cover image, such as one with different colors, cropped to a different point, inserted in a box frame, etc. The spines tended to do the same, though on a more limited basis. Many books also included quotes, reviews or more information on the author (the latter far more likely for known or popular writers). 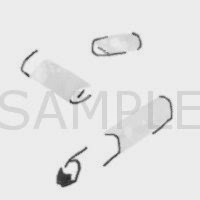 As there aren’t any professional reviews (yet) for Sanity’s Flaw and I’m certainly not a known commodity, I opted to manipulate the cover image in a manner that brings the theme to the rear without altogether duplicating the same visual. With this, I added another touch of red and a varying gradient to balance the empty space, and plugged in the (newly rewritten) description. After conferring with my wife, the latter was not “written” like the remaining text, but typed in a font matching the interior for clarity purposes.

The spine was simpler. I just took the logo, my name and the “a novel by” text from the cover, adjusted for scale, rotated them and dropped them into place. Thinking that it also seemed a little too empty for my taste, I added another cropped version of the main image at the bottom edge.

It wasn’t just the cover that took me awhile; the chapterheads I opted to add for the print version were also a time sink. I imagine if I had the funds to hire an artist or more time in a day to work on the computer, this wouldn’t have been the case, but we could play that game all day, couldn’t we? Taking them from sketches to their final iterations took more time and patience than I knew I had, but they are well worth the effort.


Next time: The Proofs, The Changes, The Decisions and everything else ahead of me
Labels: cover design editing Extra Life layout research Sanity's Flaw self-publishing technique Updates